Miss Marion took herself some risks this weekend.

Marion Cotillard attends the Chopard Gent’s Party at Annabel’s during the 2016 Cannes International Film Festival in Cannes, France in Delpozo. 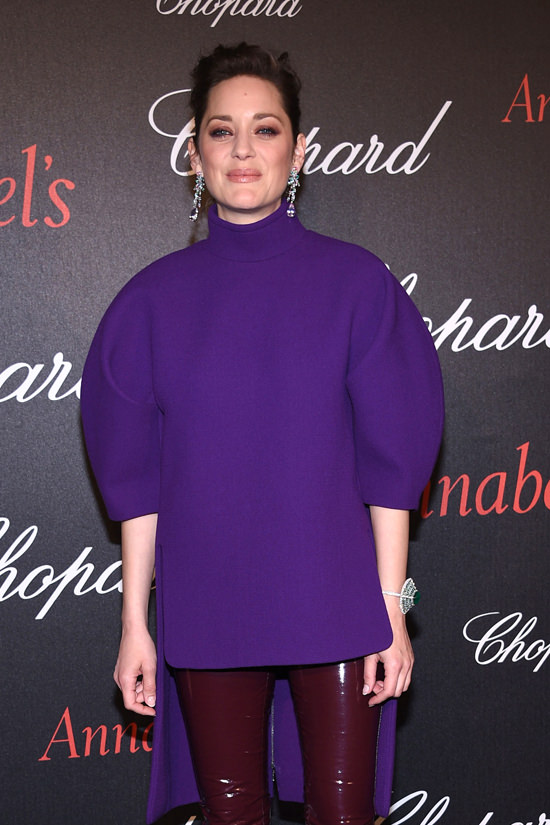 Y’know? Maybe we hit our heads recently and can’t remember it, but we think we actually might … love this? Except for the butt flap, bien sur. Because nothing’ll cause our eyelids to twitch more furiously than a tricky, asymmetrical hem. But this is colorful, unexpected fun. In a way, it’s a shame she wore it to this event, which clearly required the wearing of pounds of diamonds and gemstones. The outfit is fun and colorful enough on its own. It would be better off without all the sparkle.

And speaking of sparkle…

Marion Cotillard attends the premiere of “From The Land Of The Moon” (“Mal de pierres”) during the 2016 Cannes International Film Festival at the Palais des Festivals in Cannes, France in Dior couture. Hmmm. The dress has a bit of an Old Hollywood retro feel to it. We wouldn’t suggest she take the styling to someplace literal (like ’40s glam or even ’80s glam), but we’re not feeling the choices here. Here’s your assignment: Suggest changes for two of the following elements: hair, makeup, jewelry, shoes. We’d keep the makeup but we’re not feeling the hair at all. We go back and forth on the shoes. They’re pretty damn fierce, but they might be too much for such a dress.

Previous post:
Mariah Carey in Mark Zunino at the 2016 GLAAD Media Awards Next Post:
Cannes 2016: Riley Keough in Gucci at the Premiere of “American Honey”