Everybody gets a husband! And a castle!

This is how the Crawley family saga ends; not with a bang, not with a whimper, but with a whole lot of people pairing off. Love wasn’t just in the air. Judging by the way everyone frantically grabbed at the nearest, best prospect, we suspect love was being pumped into the Abbey’s water supply. We all expected Edith would wind up with Bertie and Isobel with Dickie by the time the series closed, but almost everyone got in on the act: Daisy with Andy, Baxter with Molesley, Tom with Edith’s editor, and even Mrs. Patmore with Mr. Mason. In fact, there’s hardly anyone in the entire cast who isn’t paired off at the end of the story, with the exception of Violet and Thomas (which is a fairly sad commentary on how Thomas’ character has been neutered). We half-expected Denker and Sprat to fall into each other’s arms passionately before the whole thing was over. In the world of Downton Abbey, there is only one kind of happy ending, and it’s the kind that has wedding vows, pregnancies, and very grand houses. For all the show’s talk about societal change over the years, in the end it was really a show about a family (not just the Crawleys but the entire “family” of people that live and work on the estate), and it ended on the concerns and triumphs all families experience, from romance to childbirth to caring for the elderly and the sick.

If we may be permitted a little complaining and criticism while you’re all still drying your eyes and sniffling, in a way, it’s kind of a shame that this is where the series ended up, because it was about much more than the rather anodyne theme of “family” when the show started. It was about the end of the Edwardian era, the beginning of the modern era, the dismantling of the aristocratic establishment of England as well as the rise of the English middle class. It was about young women taking their first steps toward boldness, on both a personal level and a political one, at a time when young women were finding their voices for the very first time in history. It was about war and the horrible costs of it. It was about the exploitation of the servant class while at the same time it was about how benevolent the ruling class wants to be, deep down. But mainly, it was about romanticizing a lifestyle that no longer exists, with all these other themes playing in the background and occasionally showing up in the foreground. Perhaps no image better sums up the rather silly conventions of this life than the scene in this episode with the family in full evening dress standing out on the lawn and drinking martinis, for no real reason other than because it looks good. And we’re fairly certain Julian Fellowes put that scene in there for just that reason. One more scenario to illustrate just how odd and yet strangely glamorous the lives of these people were. Hours spent getting dressed up in heels and silk gloves, dinner jackets and ties, all so you can stand on your lawn and drink cocktails with all the other people who live in your house. But in the end, Fellowes loves these characters far too much to be true to how he originally presented them. Remember when Cora was kind of a snob? Or when Thomas was irredeemably evil? Is it notable that Fellowes replaced the highly hateable O’Brien with the insipid but likeable Baxter? Or that Tom went from being a sexy political firebrand (and terrorist) to a fussy, sexless maiden aunt, whose entire life is about making sure Lady Mary finds happiness? Remember when Isobel was obnoxious and most of the family didn’t like her? Remember when Mrs. Patmore was a holy terror and everyone who worked downstairs was a little scared of her? Now, everyone loves everyone else. Downton is a paradise, free of conflict. And how ironic, that the show that had “change” as its main theme and raison d’etre, had as its very last line, a character wishing she could go back to the past rather than face the future. The show that started out being about change wound up being about nostalgia instead.

But! As always with Downton Abbey, when you reduce your expectations and maybe turn one or two parts of your brain off, this was a ridiculously enjoyable finale. Julian Fellowes may not be a master plotter, but he sure knows how to (you’ll pardon the phrasing) stroke the pleasure centers in his audience’s brains. Every single character got a happy ending and 90% of the finale consisted of scenes of people in stunning clothes standing around in stunning surroundings. This is, for the most part, why we all watched it, right? Because we loved the characters and loved looking at their surroundings? Well, Fellowes figured he’d pretty much forego the plotting and give you all pretty things to look at.

Oh, things happened alright. It wasn’t all cocktails and weddings. For instance, Thomas left Downton after a decade-plus of service. And then he came back. Henry wanted to find purpose in his life. And then he found it. Robert hated that Cora spent so much time at the hospital. And then he didn’t. Daisy didn’t like Andy even though he liked her. Then she did. Then he didn’t. Then they both did at the same time. Miss Baxter wondered if she could cut that bad man out of her life. Then she did. Dickie Merton got sick. Then he got better. Violet was furious with Cora for taking her place. Then she wasn’t. And in the most stunning example of plotlessness, possibly in the show’s history, Bertie’s mother was a moral scold who was virulently opposed to her son marrying a wanton woman. Then, with no explanation whatsoever, she just … wasn’t. At least Lord Sinderby got shocked into accepting Rose. Mrs. Pelham simply changed her mind because… well, just because. Otherwise, there wouldn’t have been a happy ending. And while Fellowes has a tendency to recycle plots (like the disapproving potential in-laws or the illness that suddenly reverses itself because Yorkshire doctors apparently misdiagnose things left and right), there was no way he was going to be so cruel as to ruin Edith’s chances for happiness once again. 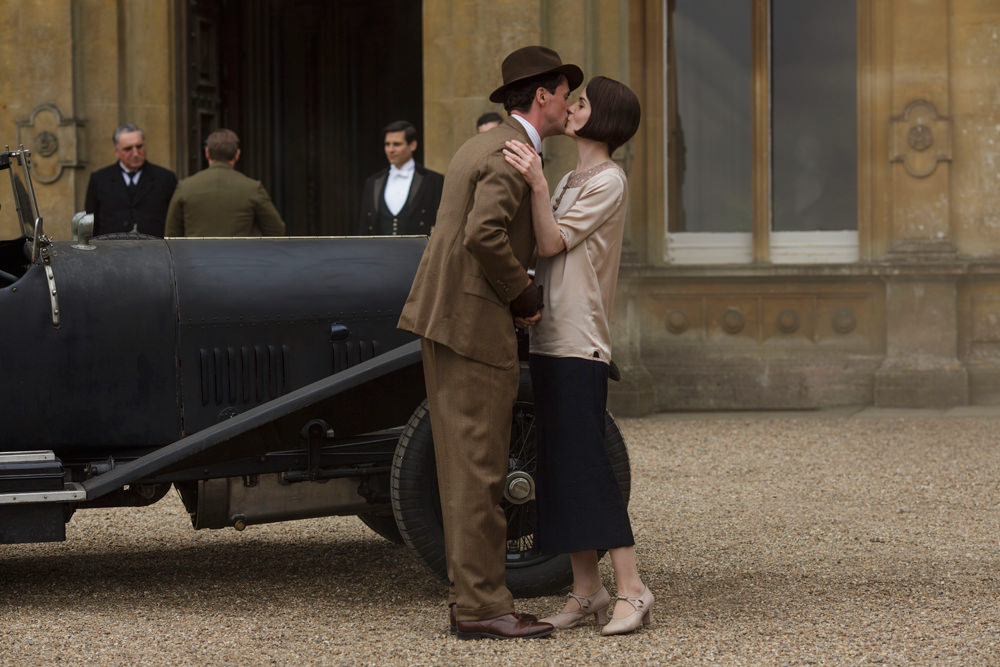 And good on him for that. Because let’s face it: did any of us really want high drama in this final episode? Or did we want to – as the camera lovingly did when it panned across the pews on the bride’s side of the church – just look at all these people one more time before they leave us? As much as we want to continue complaining about the rehashes and silly plotlessness of this finale, as much as we want to wag our fingers at Fellowes for wallowing in every television finale cliche there is (weddings, pregnancy announcements, childbirth AND “Auld Lang Syne”), we gasped a little when Mary said to Henry: “Nevermind. We’re sisters. And sisters have secrets.” What a spectacular line to sum up a series that can be hard to sum up because of its capriciousness. No, the story of Downton Abbey wasn’t a story solely about sisters, but it made a very good after-the-fact framework for the entire show.

We will miss it, though. Downton Abbey may have been repetitive and silly and sometimes just plain stagnant, but boy, do we love all those people.