Johnny Depp and Amber Heard attend screening of “The Danish Girl” at the 72nd Venice International Film Festival in Venice, Italy. Heard co-stars in the film while Depp’s “Black Mass” opened earlier at the festival. 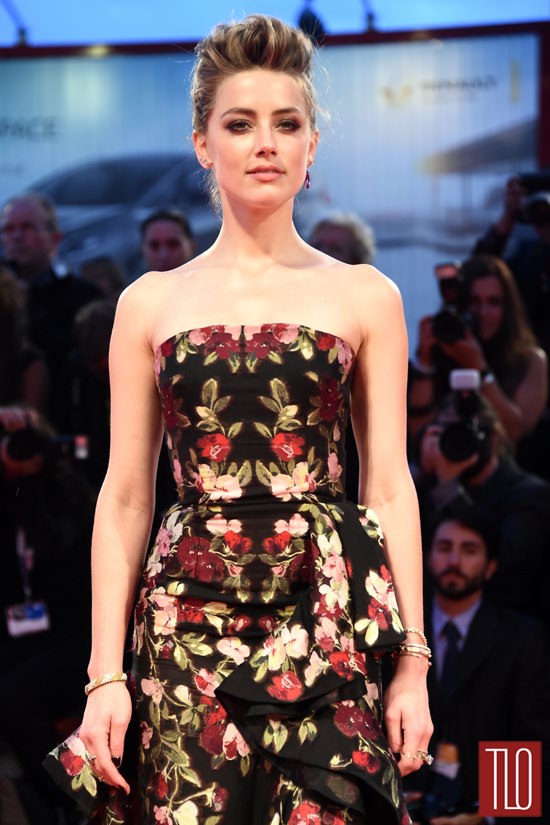 This is a set of pictures showing Johnny Depp trying hard to get his personal style and his age to reconcile with one another while also trying to turn the spotlight over to his wife at her film premiere. He is failing on both counts.

But first, let’s shower her with compliments because this is a lovely look, top to bottom. It’s either the trend for fall red carpets or merely a trend for the Venice Film Festival, but we’re seeing a TON of florals on black backgrounds recently and this one may be our favorite of the bunch. It’s a classically old-school kind of film premiere gown that suits her looks to a T. And while black pumps are getting way overused lately on the red carpet, this was the perfect time to deploy a pair. Hair and makeup are both on point and while none of the jewelry really stands out, it probably shouldn’t, which makes the low-key choices in that area all the smarter. It doesn’t have the impact overall that it probably should, but since she’s a supporting actor in the film and she’s being overshadowed by her far more famous husband (which was an inevitability), that’s not necessarily a bad thing.

As for him, we don’t know what to say. He’s clearly trying to put his scarves, chains and random leather straps behind him (or at least, he’s learned to eschew them for the red carpet), but we’d hardly call this look a step in the right direction. First off, we’re just gonna say it. Pay attention boy and man-stars: No one has ever managed to effectively update the classic tuxedo. Oh sure, there’ve been trends, from powder blue tuxes with ruffled shirts to red velvet tuxes to tuxes cut from jacquard or some other showy sort of fabric. Time and again, the men of the world have returned to the classic cut black tuxedo – as well they should. As garments go, it’s pretty much flawless. No man looks bad in a classic tux that fits him well.

We say this because a zoot suit tux is not a thing that should exist. We have no idea why this man insists on dressing like Ricky Ricardo but the fact is, those insanely baggy pants and that long jacket do absolutely nothing for him except make him look heavier than he is and hopelessly out of touch.

Actually, scratch that last part. It’s not the cut of the tux that makes him look out of touch (although it doesn’t help), it’s the circa 1999 earring style and the utterly ridiculous pair of shoes he insists on wearing. Also: the horrifying hair cut. And the eyeliner. And the facial hair. We feel a truth bomb coming on. Stand back.

Try as you might, you are not a rock star, Johnny Depp, and you never have been. You are a very wealthy middle-aged man who’s made the bulk of his fortune playing children’s characters in blockbuster films. Stop fighting what you are. Put on a tuxedo, take out 9/10ths of the ear jewelry, and get a haircut that appeared in a magazine at some point in the last 15 years. The nineties – as well as your reputation as an indie film god – are LONG in the past. You’re about as establishment as a Hollywood actor can possibly get. If you embrace it, you’ll find that people won’t hate you for it. It’s okay to grow up.