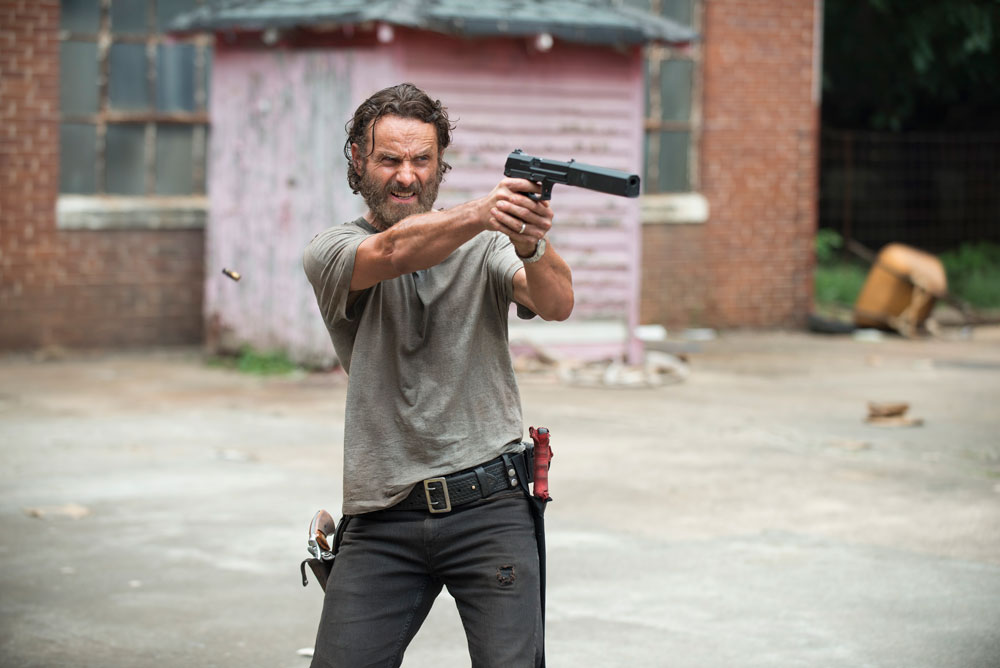 Hope is a water bottle.

One of our loudest and longest-running complaints about this show was that we found the sometimes irritatingly juvenile nihilism at its core to be both boring and unsustainable in the long run. “People suck” just isn’t going to yield engrossing results if that’s your main theme. And we think the history of the show’s sometimes spotty relationship with the concept of quality scriptwriting has born this observation out. We’ve always argued that there has to be something for the characters to strive toward other than merely staying alive. There’s a reason why nobody starved to death on LOST, after all.

Of course it would be silly to ask for “Rick’s Happy Banjo Fun Times in the Post-Apocalypse” because optimism doesn’t make much sense in a story like this. And the audience wants to see conflict and tension, not people working together to build safe communities. As much as we think it was an over-hammered theme in the earlier seasons of the show, “Kindness will get you killed” does tend to make some sense if it’s handled well, as it was with Sasha and Other Bob in this episode. Yes, she was acting stupidly, but the script, and that very strong scene with Tyreese, more than set up why she would be so trusting of a total stranger.

But it says a lot about how the show’s writing has evolved and matured that not only was a moment of optimism considered necessary to include for balance, but that it was so well handled. After having been dealt a blow so crushing that a murder-suicide seemed like an inevitability for the character, we see Abraham’s bloodied hand reaching for the water bottle left for him. He will continue. In this world, that’s hope. And we’re damn impressed at the deftness with which the script handled the imagery and metaphor here. Subtly and beautifully done. This story feels heavy with doom and the expectation that characters we finally care about are going to die. It needed that small moment to … not so much lighten the mood (because it didn’t), but to serve as a reminder that no matter what happens, these people will keep on keeping on.

While we thoroughly enjoyed this hour, it’s very much all setup and checking in before the next big face-off. We’ve seen this kind of episode from The Walking Dead before, but we’ve never seen it executed so well. Virtually every character in this, the largest main cast the show’s ever had, not only had a moment, but they had a fairly important one. In a case of the structure of the story mimicking the experience of the characters, everyone did their part and pulled their weight this episode. Although hearing Michonne and Carl speak after such a long time (relatively speaking) did serve to remind us how little both characters have had to do all season. Still, we get it. Some of the characters almost certainly needed to be sidelined in order to do the hard and necessary work of defining the rest of them. Michonne simply didn’t need the camera time as much as other characters did, and who really cares what’s going on with Carl at any given moment?

As for Rick, whose relative absence this season has been a welcome development, we wonder if we’re not being set up for “Rick is RIGHT” moment, since Tyreese’s Daryl-approved bloodless plan B isn’t turning out so hot. We thought it was a pretty powerful moment when Daryl stood up and said “Let’s do it someone else’s way, Rick.” Lincoln and Reedus played that moment beautifully. You could see the bond of respect and shared experiences that was permeating the interaction. Daryl’s one of the few people who can get Rick to stand down. And it makes sense that he’d want him to, because the more bullets there are flying around, the higher the likelihood that Carol doesn’t make it out alive.

And speaking of which, this was the first time we truly “got” Beth’s character, and we wonder if that’s just us, or if the script suddenly clicked into place around her. We don’t buy her as a badass, but this ice-cold schemer persona really works for her. This was the first time we felt like we were watching someone who went through hell and came out the other side harder for it, much like Carol but rendered in a different way.

The show’s surprising turnaround basically comes down to one extremely important concept, which the creators behind the show finally figured out: the audience has to care about the characters and the characters have to care about something in order to make them seem worth caring about. It’s amazing how quickly everything gels once you address that one script flaw. For the first time ever, we’re afraid to watch the next episode because we’re pretty sure we’re going to cry.

Honestly, if they manage to make us cry after years of us bitching about this show, just give them all the Emmys, we say.