Her last few contractually obligated red carpet looks have caused weeping across the land, so we feel it’s our duty to show what Miss Marion is sporting on her down time, when she just wants to be herself and doesn’t have to wear dresses that look like rubbers or ghost children. It’s a goddamn shame that she’s been forced into a succession of increasingly horrifying Diors and THIS is the most “French film star” she’s looked in ages. Something’s wrong when the House of Dior can’t even manage to make Marion Cotillard look like a French movie star.

Everything here is adorable. Low-key chic.

Later, Marion decided to get down with her funky fresh self, ’90s-style: Marion Cotillard seen out and about in SoHo in New York city. 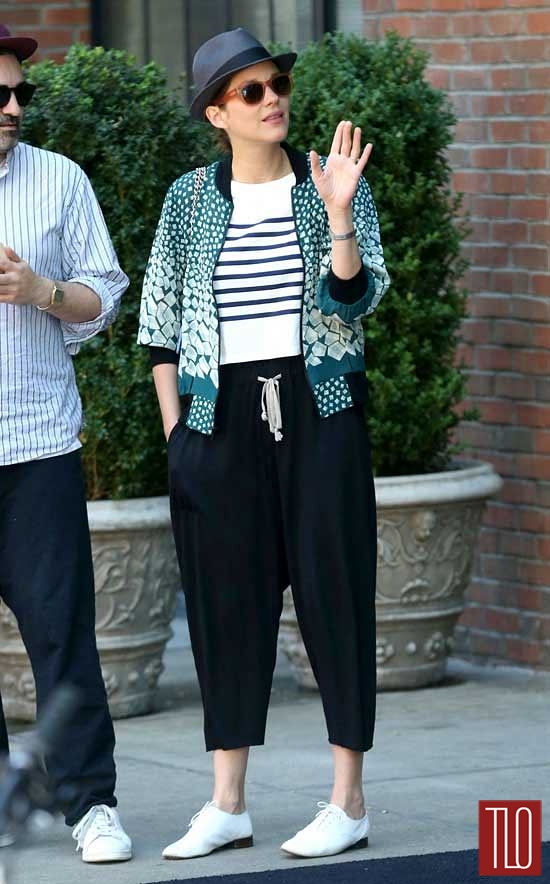 It’s so hilariously unexpected – and strangely, somehow well put-together – that all we could do is burst out laughing and then applaud the look. This isn’t so much “’90s hip hop” as it is “elderly ’90s hip hop record producer, ”  which is  delightful on her, for some reason. Well played, Miss Lady. We hate this look top to bottom, but at the same time we love it for being so boldly off-kilter and out of left field.