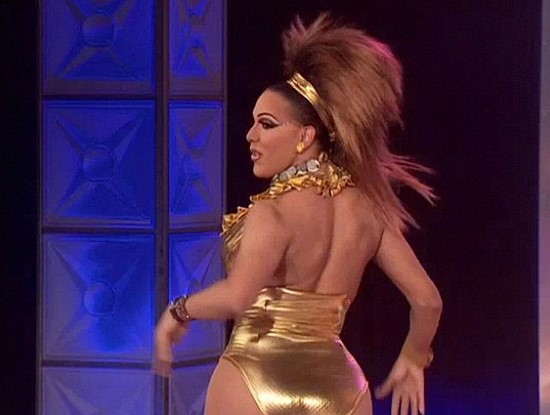 Y’know… our initial reaction to Alexis’ little meltdown was similar to Manila’s: she’s won 3 challenges and she’s top 4; what the hell is she complaining about? But looking over these screencaps, we do think the judges, Michelle in particular, are pretty harsh with her. How Michelle looked at this and came up with “abuelita,” we don’t know. It’s actually not a bad look. You could ding it for being tacky, but how far can you take that criticism in a drag competition? 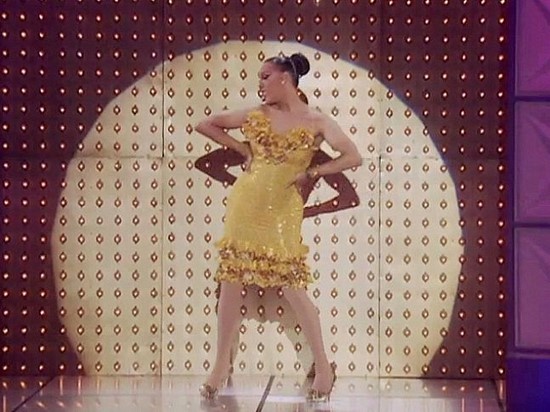 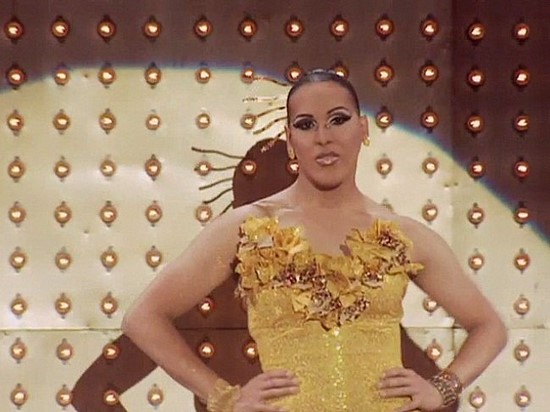 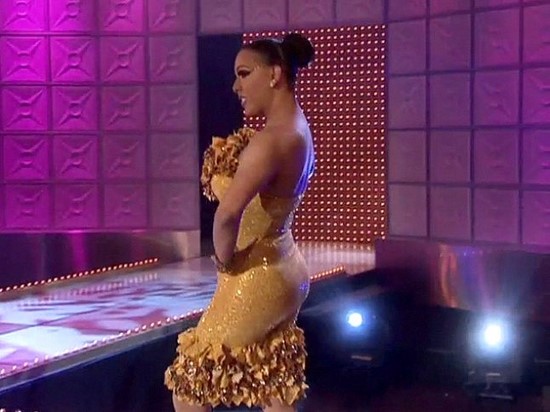 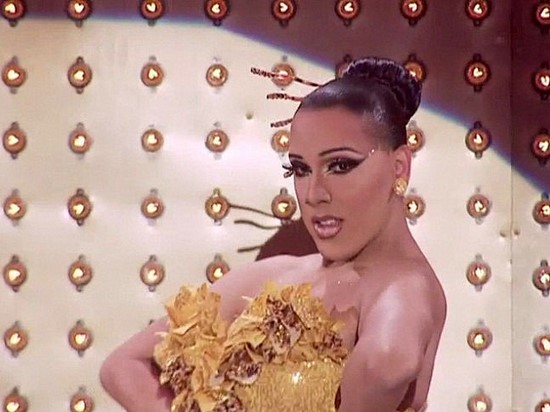 And while we agreed with Michelle that the tight hairstyle was a bad idea, calling her a pinhead seemed harsh. It’s somewhat true that Michelle wouldn’t talk to Raja that way. This is an okay look. It doesn’t really hit the money theme as hard as some of the other entries, but it’s polished and well made.

The criticisms of her padding are starting more and more to sound like criticisms of her body, frankly. And even if we’re mistaken on that, there’s no doubt that’s how she took it. She’s the largest of the remaining girls and she’s indicated more than once that she’s deeply insecure about her body. We look at her shots from the back here and we think the padding looks pretty good. If Alexis is thick around the middle – or at least unable to mimic a tiny waist – then padding is the way to go. Otherwise, she’s going to look like a man in a dress and that’s clearly not the kind of drag she wants to do. 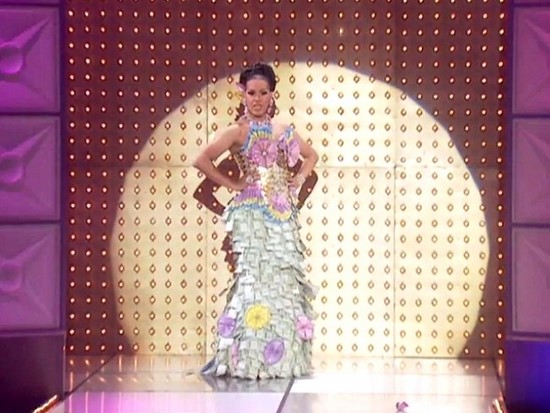 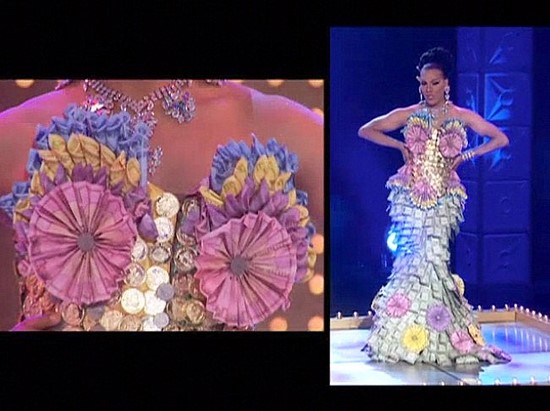 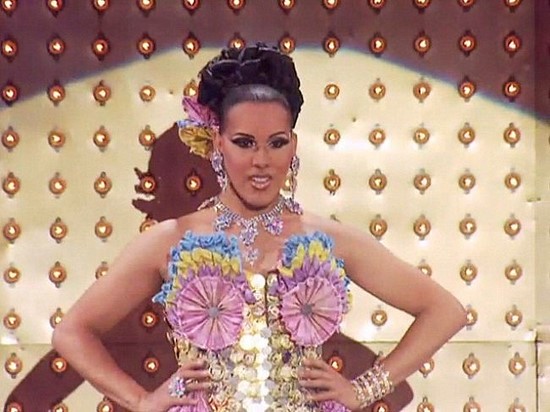 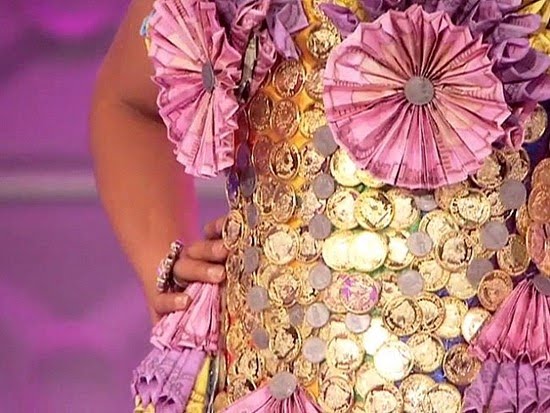 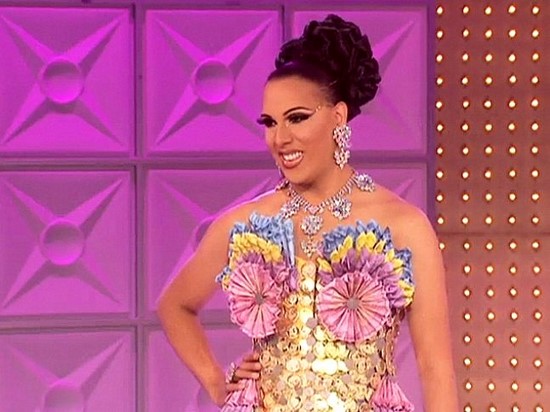 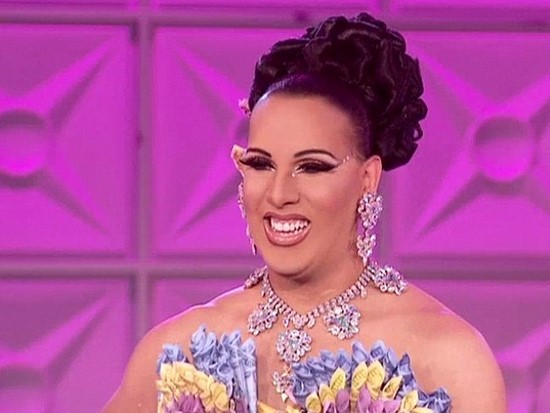 The deli platter remark also seemed harsh, especially coming on the heels of “abuelita” and “pinhead.” Michelle really needs to tone it down. We know from interviewing her that Ru really values the ability of a queen to let insults roll of their back because they’re going to face it out in the world. We suspect Michelle was deliberately brought on this season to be the bad cop of the group in order to weed out the girls who can’t stand up to scrutiny. That makes a certain amount of sense, but Michelle really does zero in on Alexis and nitpick her to death.

Don’t get us wrong; this was a terrible outfit. Big and clumsy and lacking style or wit. But Yara was the one who got sent home and none of her criticisms were as harsh as what Alexis got. We don’t exactly applaud her meltdown (we were pretty annoyed with her when she walked out), but looking at it a day or two later, the girl has a point.

On the other hand, she is a queen with some practical issues, as far as this competition is concerned. She is extremely polished; as polished as Raja and Manila, in fact. But she rarely ever looks pretty. The hair is usually too tight and unflattering and the makeup is harsh and doesn’t play up her features well. Her eyes disappear and her mouth becomes center stage, which is the exact opposite of what most drag queens do. She needs to explore wigs more and she needs to have a makeup artist give her a makeover. She clearly knows how to apply makeup, but she needs someone to show her the best face for her. And she doesn’t dress her body very well. The issue isn’t the padding; it’s the style of outfit she tends to favor.

And the latex tits need to go. 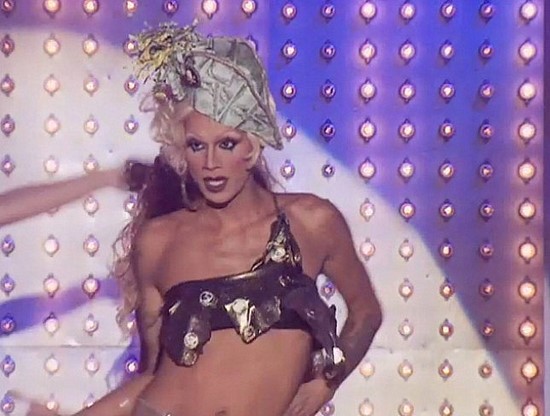 The swimsuits all went by so fast we couldn’t really get more than a glimpse of them. This seems like standard Raja. We love the hat and the makeup.

Incidentally, the downloadable versions of the show on iTunes and Amazon are corrupted, which means we can’t get shots of the mini-challenge. We remember Raja’s was pretty bad and to be honest, we can’t remember Alexis’ at all. 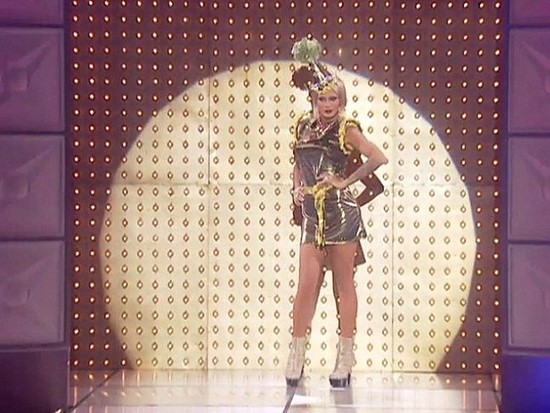 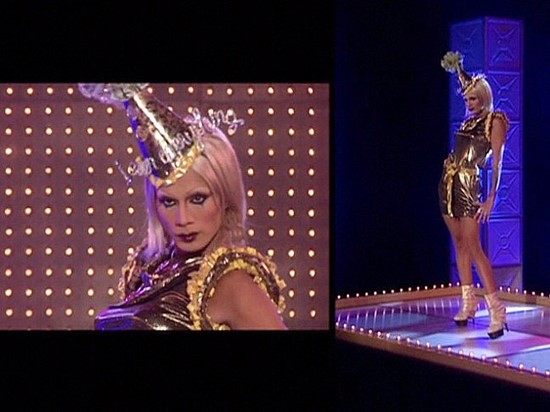 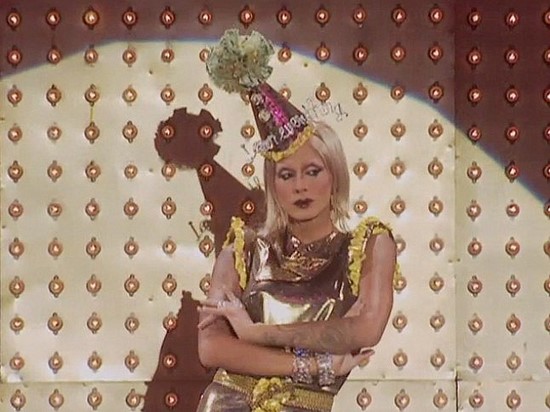 We got what she was going for here – a Paris Hilton celebutante sort of look – but Raven pretty definitively proved last year that Paris does not make a very good drag character. The dress was surprisingly bland. It seems all the work went into the hat. 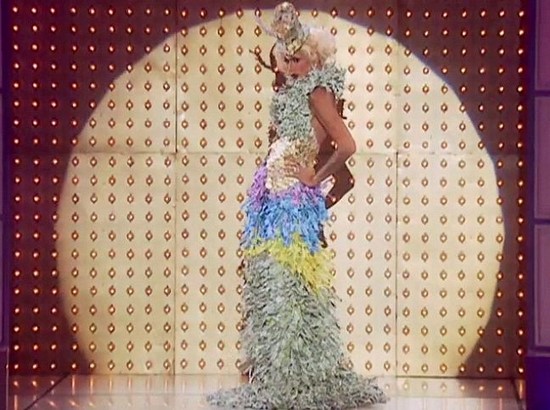 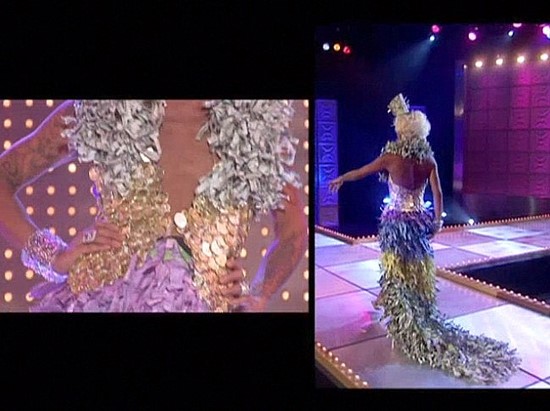 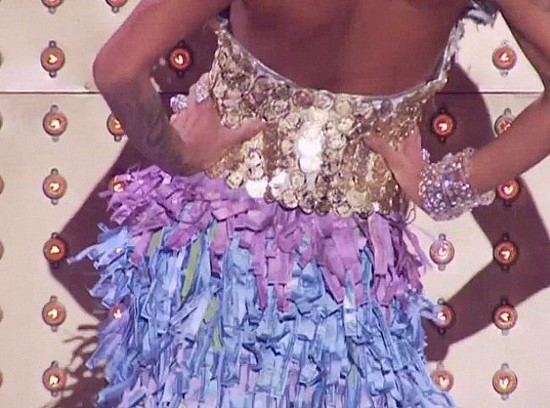 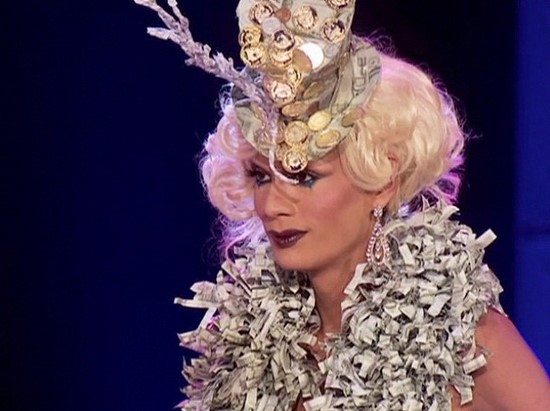 But – and we’re well aware there will be some strong disagreement here – this dress blew all the other ones out of the water, including Manila’s, and pretty much erased any deficiencies or missteps previously made (RuVC, bad dancing, boring after 5 look). She came damn close to winning based on this dress alone, and considering how badly she did on some of the other parts, that should tell you something.

For some, what it tells them is that Raja is the judges’ pet and can do no wrong in their eyes. We disagree slightly. Sure, they fawn all over her, but her sense of style and ability to execute it really is extraordinary for a drag queen. We can argue over whether so much importance should be placed on style, but it’s been an obvious component of the competition since the beginning. It is, after all, a competition based on the career of RuPaul and that girl has a ton of style to her. The praise Raja gets is not undeserved, as far as we’re concerned, but Alexis has a point that they don’t really criticize her very strongly when she falters.

Previous post:
RuPaul’s Drag Race: Catwalk Meltdown Next Post:
All On The Line S1E3: Between The Sheets