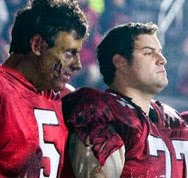 “You’re so afraid of being called geeks or losers or gay that you settle for being nothing.”

It’s time to face facts, kids. Glee, by its very nature, is always going to disappoint a segment of its fans, no matter what it does. If it attempts linear, logical storytelling and consistent characterization, there will be those who say they miss the over-the-top silliness of it all. If it chucks all storytelling conventions and offers up something crazy, there will be those who say the show is frustrating because it makes no sense. The thing is, a huge part of the show’s success and appeal is precisely because it’s so unpredictable and because it’s capable of doing both kinds of shows within the confines of the same fictional universe. You can have heartbreaking or uplifitng character moments with this show AND you can have insanely ridiculous plot developments. You probably won’t have both within the same episode and that’s why the show has such a reputation for being uneven.

With this opening number, we immediately settled in to the realization that this was going to be one of the over-the-top ones. Not coincidentally, most of the unrealistic and over-the-top episodes feature Sue Sylvester rather heavily. She’s not a character that works in a conventional story and she’s a huge part of the success of the show, so we actually welcomed this opening, knowing that we were going to get Crazy Sue instead of Crying Sue. When she trashed the school in anger was it realistic? Of course not, but it was hilarious. Shooting cheerleaders out of cannon: ridiculous. Giving Brittany a crayon drawing from a cannon? Hilarious.

Of course, you have to have some form of story and you have to at least tip your hat to past storylines in order for the show to work. It seems like the writers are going to throw all the balls in the air again, romantically speaking. On the one hand, that’s fine because it’s not as if high school is a bastion of monogamy and long-term relationships. On the other hand, resurrecting the Quinn-Finn-Puck triangle seems like a step backwards. Sure, Sam’s in the picture now too, but that only makes Quinn look, well, a little slutty. Not so much in the physical sense, but the emotional one.

How freaking fabulous was THAT?

So the development with the football team made absolutely no sense in terms of realism, but it allowed the show to return to its major themes of popularity vs. being true to yourself. This was an okay number, but we’re 25 years older than these characters and even we had to hit the Google to figure out why this song came out of nowhere (original recording by The Zombies is why). But come on, no 16-year-old is likely to know that, let along know all the words. Then again, very few 16-year-olds would get as excited as these kids did over doing a 30-year-old Michael Jackson song either. Still, it was a decent performance and a rare chance for the show to do an all-male, large-scale number. Finn actually sounded decent here.

Even we had to admit “Wow, that’s really, really gay.” Like, “pink Christmas tree full of singing parrots” gay. We realize Dalton is supposed to be the nirvana of tolerance, but they already established that most of the members of The Warblers are straight, so… You know what? We’re doing it again. Applying the real world to this total fantasy world. It’s enough that we got to see Darren Criss and his band of pseudo-‘mos be adorable.

AWESOME. Another thing the show has a reputation for is questionable mashups, but this is easily the best one they ever did.So the story ends exactly as one would expect it to end, with the football team winning and every single teenager choosing to be true to themselves (even Karofsky, momentarily) rather than choosing popularity. Realistic? Not by a long shot. Entertaining as hell? You betcha.

Before we get to the quotes, we wanted to single out Karofsky, because they’re really doing something with this character and that’s a welcome sight. There are all types of gays in the world and while we adore and identify with scarf-loving Kurt, it’s great that they’re also focusing on macho, highly conflicted Dave. In fact, his may be the more interesting story in the long run. After all, Finn seems to be very close to figuring out just what his problem is.

“I try to make a habit of not touching carnie folk.”

“You don’t go in that cannon and this routine will be all boom-boom and no pow. And that, Brittany, is so 2000 and late.”

“I bring Finn a glass of warm milk every night, just in the hopes we may have a little lady chat.”

“Brittany, here’s a note for you, handwritten and in crayon, from the human cannon, saying how much it misses you.”

“I don’t want to die yet. At least not until One Tree Hill get canceled.”