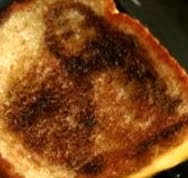 Well, we’ve resigned ourselves to the idea that the Gleeks are going to hate us because we’ll be giving two negative reviews in a row. Granted, this wasn’t as weirdly bad as last week’s Britney episode, but we were pretty annoyed by the end of it. Glee has an unfortunate history of wandering away from its more cynical undertones and embracing full on Afterschool Special shmaltziness. When you’re talking about, say, quadriplegic kids, that’s almost forgivable. But when Glee, of all shows, “tackles” religion and comes up with a message indistinguishable from your average Hallmark Channel movie, something’s gone awry.

But first, take it away, Puck:

Cute. A great song for him to do because it’s so perfectly in character for him. Strangely though, it wasn’t nearly as good as his “Sweet Caroline” of last season.

The thing is, if the show wanted to firmly come down on one side or the other, they should have just owned that. Early on, we were treated to some scathingly insightful dialogue, both from the “pro-religion” camp (represented by almost every member of the cast) and the “anti-religion” camp, represented by Sue and Kurt. Right off the bat we have a problem because the ones saying the most vehemently anti-religious statements are the gay character and the show’s villain. There are no other atheists or agnostics in that group of kids? Come on now, even if it’s teenage posing, it’s not hard to find self-professed atheists in a high school.

ABOUT FRIGGING TIME. Look, we love Lea Michele on this show, but for our money, Amber’s voice blows hers out of the water. Plus, she has a far more naturalistic performing style. No cry-singing here.

Let’s talk briefly about the things we liked. Santana and Brittany reaching out to Kurt. That was actually sweet. In fact, the entire glee club’s support was pretty heartwarming. Too bad it was also predatory and a little creepy. It seems no one was capable of offering their support without also trying to make Kurt feel bad for not embracing religion.

Cute, but a little expected. And MAJORLY creepy both that she would think it appropriate to ignore Kurt’s wishes and take her singing prosyletizing directly to Burt’s hospital bed and because she’s singing a song about a dead father to a father who’s at death’s door. Creepy. We don’t blame Kurt a bit for being pissed and throwing them out. If only the writers had the balls to leave it there.

At least they got away from screwing up the religion story long enough to give Kurt a chance to shine:

Two things: that kid looks AMAZINGLY like Chris Colfer and Chris himself has obviously been taking lessons over the summer because he has way more vocal control than he used to. This number was beautifully done and heartbreaking.

Let’s see. What else did we like? We love that Emma is the only adult in that school who isn’t the least bit intimidated by Sue. We think they’re doing a slightly better job with her character this season. She’s less of a cartoon and more of a real person. Also, it was nice to see that Sue’s objections to religion were coming from the heart and not from some lame form of “villainy” because the latter would have caused us to switch channels. For once, she really is looking out for those kids and she has good reasons (or at least, not “bad” reasons) for doing so. We were a bit surprised she’d be so open with Emma.

Producers: Don’t give Finn solos. They’re painful. At least the song selection was a good one, because “Losing My Religion” isn’t so much sung as it is talk-sung.

Anyway, look: The problem we had with this episode was that they were clearly trying to show both sides of a rather sticky subject but they (unintentionally, to our way of thinking) came down heavily on one side.

Fabulous. But the point has been made. Agnostics or atheists need to be “taught a lesson.” Kurt learned that gay men can walk into a Christian church, dressed as flamboyantly as they want, and be welcomed with open arms, an idea that is laughable on the surface. Kurt also learned that if you just succumb to all the creepy proselytizing while you’re in a vulnerable moment means that God will grant your wish and make your father better. Sue learned that “God doesn’t make mistakes” and tearfully and gratefully accepts her sister’s offer to pray for her.

Look, you want to do a pro-religion episode? Do that. Own it. But don’t start off as if you’re showing all points of view, only to have one point depicted as flawed at the end. They didn’t have the balls to have Sue and Kurt happily embrace their atheism. Very disappointing.

Don’t get us wrong. This was a beautifully acted episode, with some great lines and great songs. We just wish they’d kept it at the level instead of attempting to teach the audience a lesson about faith. For obvious reasons, this wasn’t exactly a hilarious episode, but they still managed to squeeze out some LOL-lines:

“Wasn’t I the one that bought you that Maria bonnet when you were six?”

“Sue, children should be allowed to profess whatever faith they choose.”
“At the BET Awards, but not at a public school.”

“This country is not a monarchy, William. Believe me, I tried.”

“They should totally go to Jew church.”

“I’m sorry for what you’re going through, Lady.”

“I’m sorry, Madam Secretary, I’m going to have to call you back. Love to Bill.”

“I realize you’re only half orangutan bit I’m very allergic to your lustrous ginger mane.”