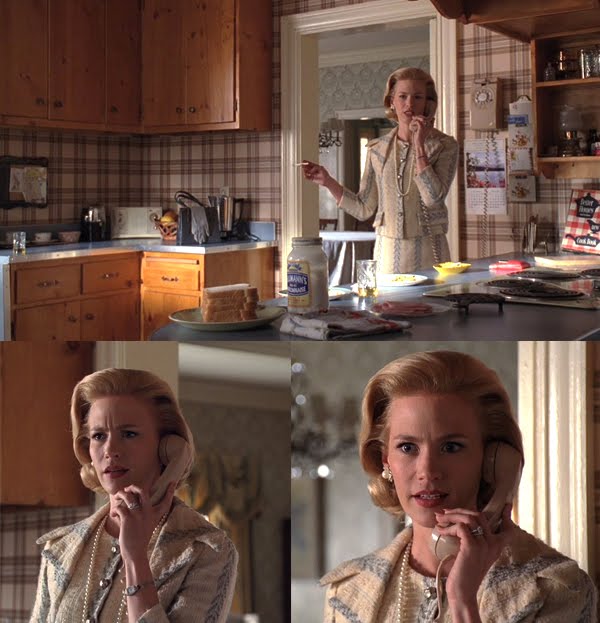 You know, for all the shit she gets from reviewers and fandom, at the end of the day, Betty’s anger is usually pretty understandable, at least as it pertains to Don. He’s proving himself to be as reliable and accessible an ex-husband as he was a husband.

Here she is having her brief moment of rage looking particularly armored up, from hair to (battle) suit, a unified wall of anger. The creams and soft blues serve to perfectly tie her to her surroundings.

And check out the old-school glass Hellman’s jar on the counter with the stack of white bread. Obviously, a hastily put-together lunch was just shoved at those poor kids. 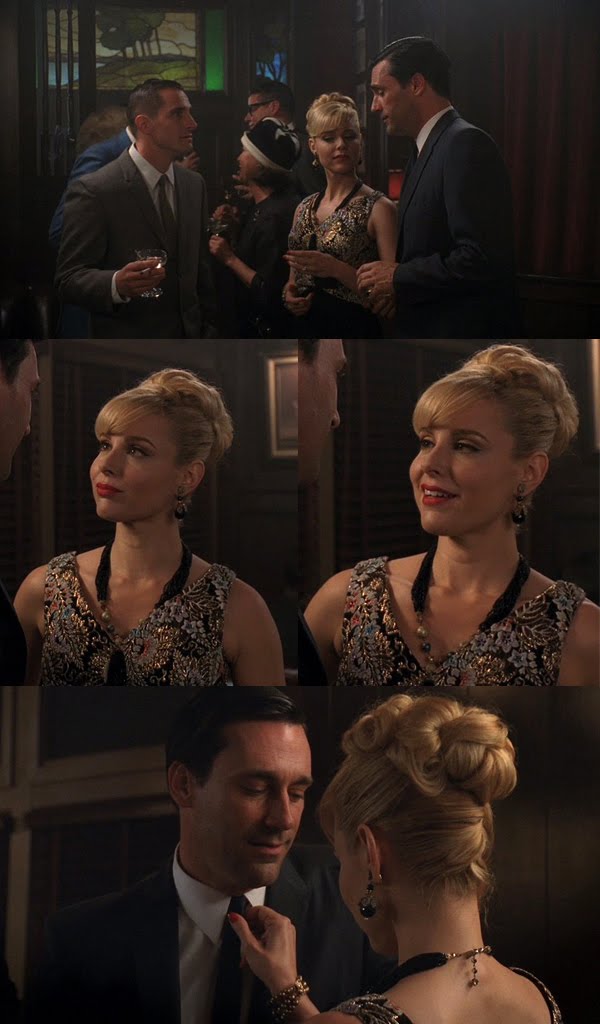 It’s kind of interesting to note that, for a professional woman, Dr. Faye is usually seriously dolled up. Her hair is lacquered and her makeup is heavy, and she’s not afraid to wear some fairly showy jewelry. This is pretty accurate for the times as women were given a little more leeway to push the boundaries of their presentation. Hair, makeup and jewelry were all revving up at this time, just like clothing was. By the end of the sixties, you’ll have the more explosively colorful and attention-grabbing developments in fashion clashing with the back-to-nature schtick of the counter-culture with the mostly unfortunate result being the vast sea of brightly colored polyesters and brushed denim that was the seventies. 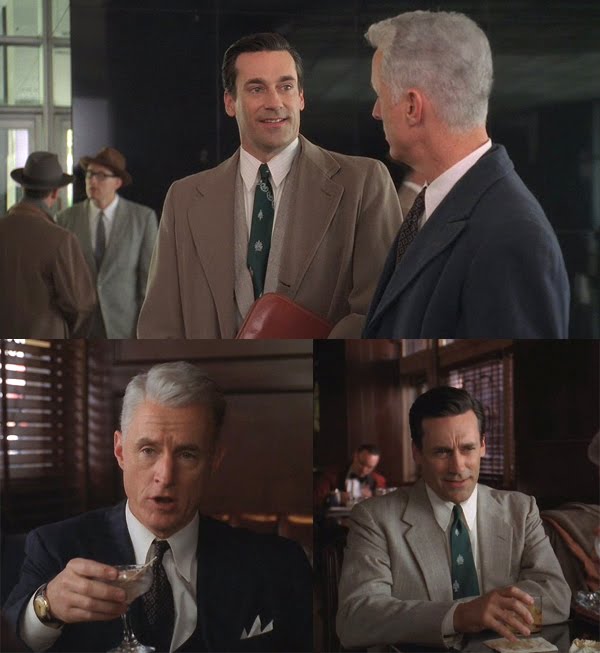 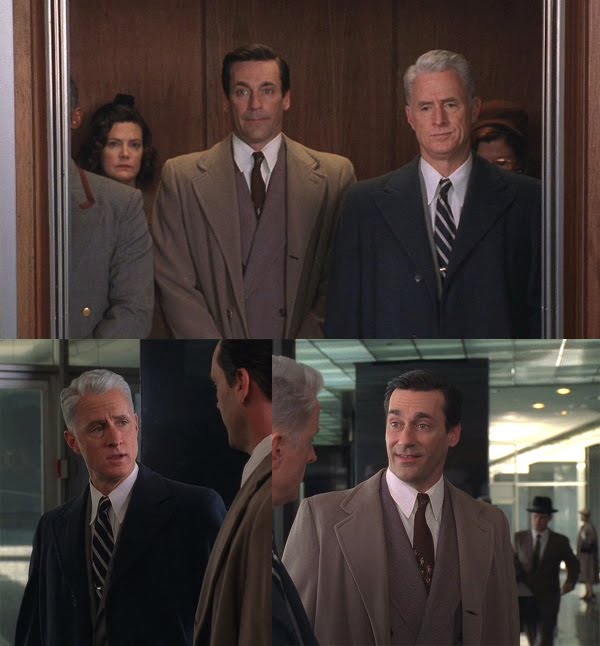 One of these weeks we’re going to get started on the male characters’ entries for the Mad Style series. Here’s what’s taking so long to get that off the ground: Don, Roger, Pete, Harry, Ken, Paul, and Sal all wear the same suits, all the time. Or at least about 95% of the time. It doesn’t offer the same possibilities for character and cultural examinations as the women’s clothes did. We have a solution, but it’s an especially time-consuming one. Soon on that, promise.

Anyway, if we HAD done some male character Mad Styles, then you probably would remember everything we showed you about Don and Roger’s current looks and can easily spot the differences here. It’s the ’50s, so collars and lapels and shoulders are much more prominent. As we said once before with Roger, he’s almost certainly been going to the same tailor having the same suit made most of his life. Probably the same tailor his father used. 1965 Roger favors vests and more tailored jackets than this and he also favors pin collars, but the basic bones of the Roger Sterling look are here. Don’s the one who’s changed the most. Given the timeline, he’s newly married to Betty and possibly even a new father at this point, a far cry from the cynical, closed off, philandering successful ad man he would become. We’ve never seen Don in a double-breasted suit, as here. The ties are a little more colorful and wider than the 1960s version and note that in the first scene, he’s wearing a colored shirt, something we’ve never seen on later Don. Also of note, and a good bit of character-based costuming, he’s wearing the same suit in the first and third scenes. Of course Don the fur salesman doesn’t have that many suits to choose from. Incidentally, we love the color of that suit, that perfect ’50s brown with a hint of mauve in it.

And check out Betty modeling the fur that would later become hers. Don wound up giving that fur to her as a way of earning a date and she fondly told the story years later. How ironic is that tagline considering Betty did exactly the opposite of what it’s suggesting? Check out her lacquered ’50s Dippity-Do hair. 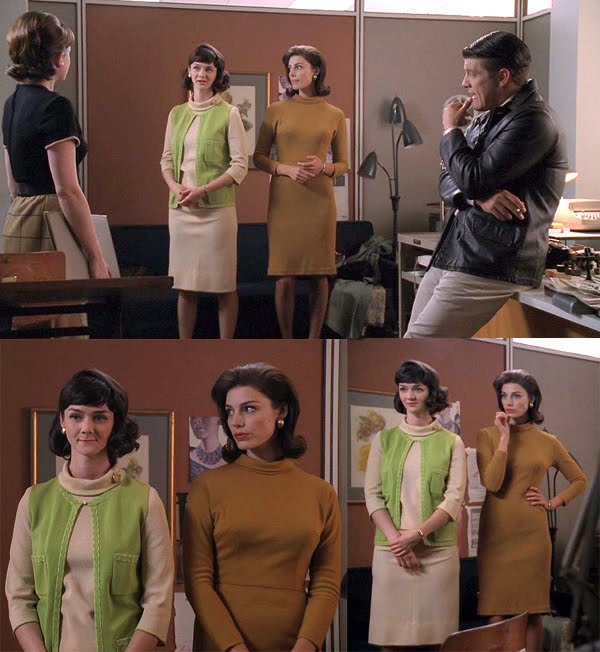 Just a quick shot of some 1965 secretarial wear. Clara has an unfortunate hairstyle. Megan is obviously the ’65 model Holloway. That is one spectacularly perfect flip ‘do.

Why did flip ‘dos never really come back? Too much work? 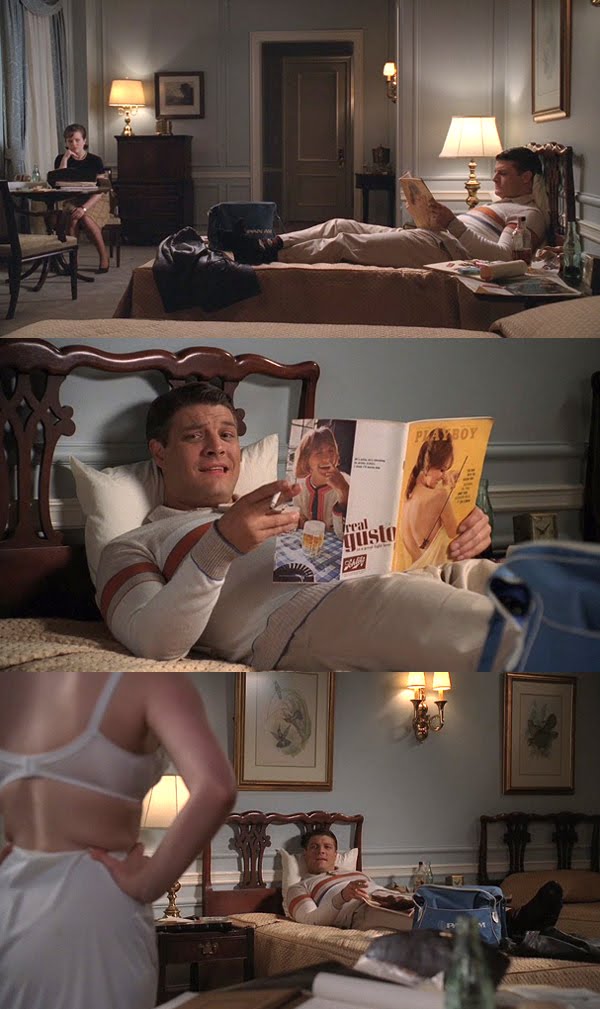 Not much to add here. We’re pretty sure Rizzo’s leather jacket was 1965 douche wear, but the rest of his outfit is fairly unremarkable. The boy wears his pants mighty tight, but that was the style, especially in douche wear.

What’s also of interest is that he’s reading the April 1965 edition of Playboy: 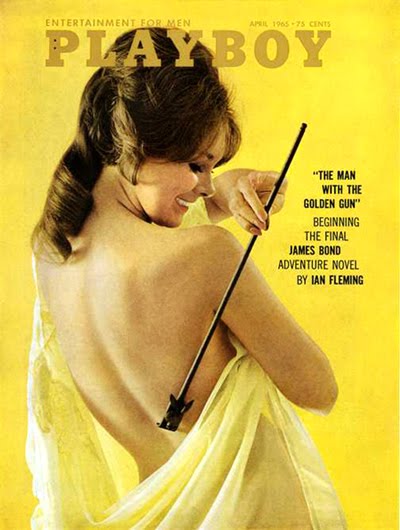 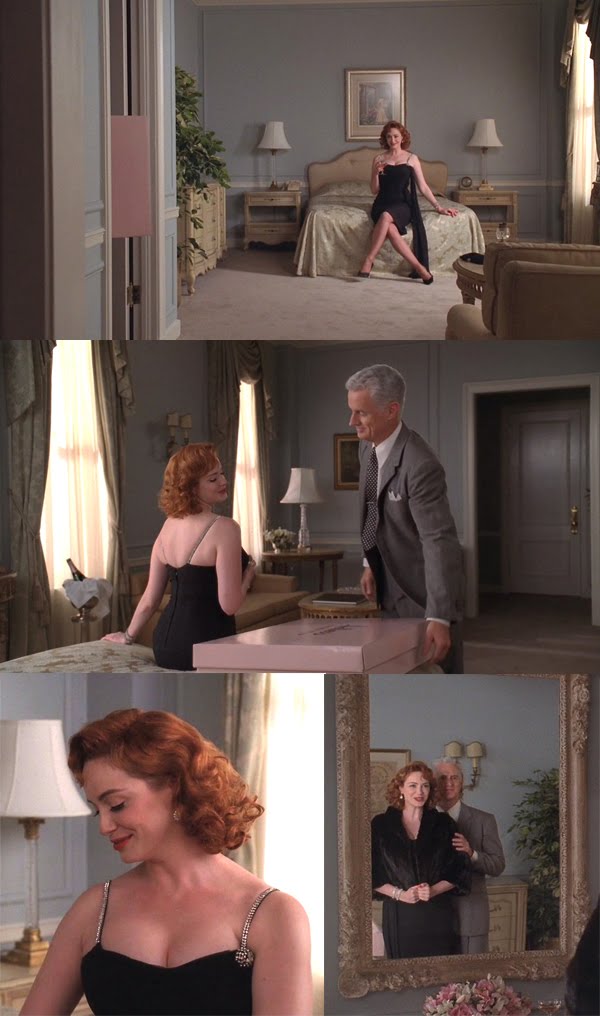 And here’s our 1955 model Joan Holloway, in all her voluptuous flame-haired Marilyn glory. As is true with a lot of women when they pass from their twenties to their thirties, young Joan was a LOT more daring in her choices. We’re reminded of her “let’s go out and pick up men” black dress from 1960, which was practically Victorian in comparison to this va-va-voom number. Not that we’re all for cheering on infidelity, but how did Roger resist leaving his wife for Joan but did it in a New York second when Jane came along? We’re not heterosexual men, but come ON.

Love her curly, sexy, we’ll-say-it-again: Marilynesque hair. Now do you understand why Joan was crying the day Marilyn died? There was a time when she obviously took her cues from her, as a lot of Joan types did back in the day.

Still, for all the fun it was getting to see Joan dolled up in her 1955 best, what was most illuminating is just how different Joan was before she got cynical. The cooing, giggling flirting bombshell is a far cry from the efficient and sometimes even cold experienced woman of later years. 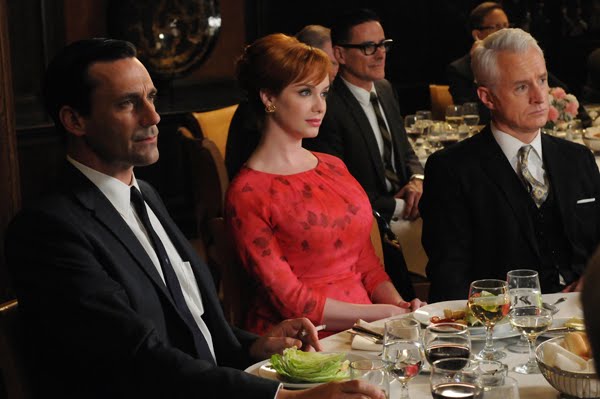 And nothing could illustrate that better than this getup. In many ways, the flashbacks served to show how these three people are connected going back a while and how much they’ve changed in that time. Scroll back up and take in her ’50s look again. Joan of 1965 is more covered up, less dolled up, and yet still very aware of where her appeal lies, at least as it pertains to men.

It’s also notable that, like her dark blue dress with the ruffled collar, she’s finding ways to make ’60s elements work on her ’50s body. Gone are the scarves and scarf-like treatments here, in favor of a softly gathered jewel neckline that flatters her. She’s obviously settled on saturated hues for her mid-sixties looks and this hot floral pink looks great with her bright orange bouffant.