“The hardest part was realizing you’re in charge.”

There are so many aspects to Mad Men that make it a superior television series, but one of our favorites is the pool of rich peripheral characters who support and enhance the storylines, giving the main characters someone to bounce off of and enriching the tapestry of the show through a combination of good writing, directing and acting. Among the more memorable of these characters was Helen Bishop, the wry and somewhat cynical divorcee who lived down the street from the Drapers in Ossining, portrayed with beautiful subtlety by Darby Stanchfield.

We didn’t know it at the time, but Helen served as both a warning and a wish to Betty Draper, who found her to be particularly problematic and threatening to her lifestyle. All the women of Ossining seemed to be threatened by her and by the idea that she represented, an idea that was almost completely foreign to them before she came along: you can leave your husband if your marriage isn’t making you happy. 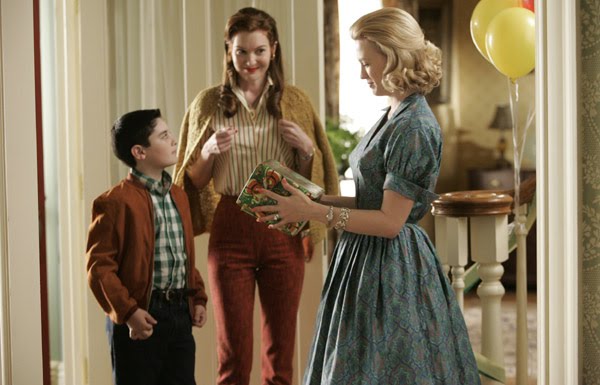 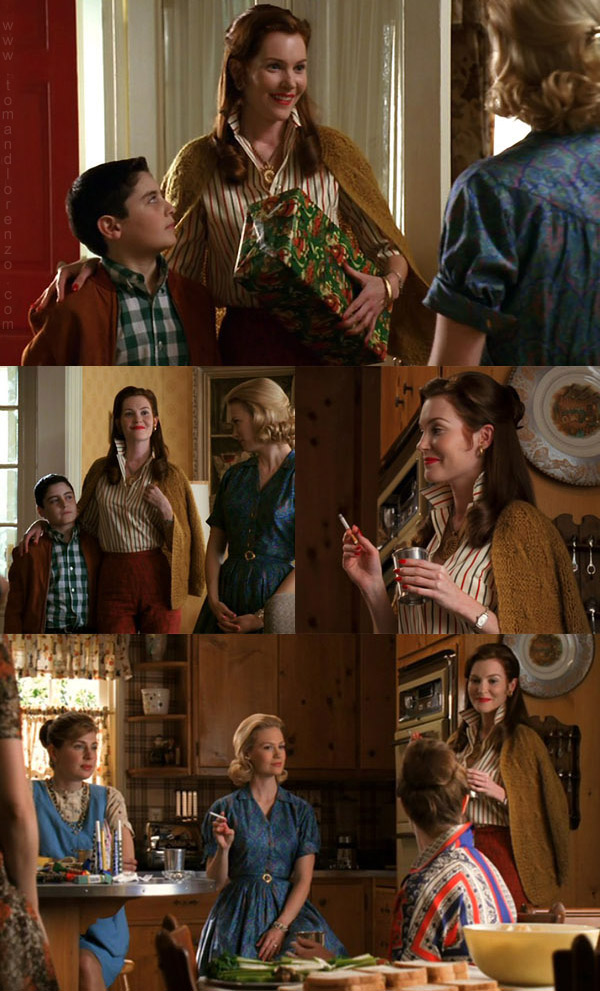 It’s Sally Draper’s birthday party and all the neighborhood wives gather with their children and reluctant husbands at the Draper house. The women sit in the kitchen and smoke, the men stand in the dining room and drink and smoke, and the kids all run around playing. Betty lets slip to the other women that she invited the recently moved in Helen Bishop to the party. The women are appalled but Betty tells them she really didn’t have much of a choice. They gossip about her before she arrives. They are nonplussed that she drives a Volkswagen and goes for walks. “Where is she going?” wonders Francine.

Helen arrives late with her son Glenn in tow. She apologizes both for being late and for not being able to find anything but Christmas wrapping paper since she hasn’t completely finished unpacking. The women all treat her a little coldly and the men a little too warmly. She handles the social gauntlet with aplomb.

Finding the kitchen a bit too oppressive (in more ways than one), she heads outside for a smoke and stands with Don, watching the kids play house, their play words revealing quite a bit about their parents’ marriages (“You’re sleeping on the couch.” “I don’t like your tone.”). The women in the kitchen alert Betty to the fact that an unmarried woman is standing next to her husband. She goes outside and asks Don to go to the bakery to pick up the cake. Don, because he’s an asshole, doesn’t come back. Betty is stuck without a cake until Helen offers to save the day with a frozen Sarah Lee she has in her fridge.

We looked at this scene from Betty’s point of view before but now we get to see a little more of Helen’s outfit. Helen always stood in opposition to all the other housewife characters on the show, therefore, all of her costumes made statements in opposition to the housewife costumes. All of the women are wearing floral or paisley dresses; Helen’s in a striped blouse and (shocking!) pants. In particular, the warm yellows and reds of Helen’s outfit are in perfect opposition to the cool blues and greens of Betty’s paisley. All the women have helmet hair or an up do; Helen’s hair is long, loose and relatively soft looking in comparison. In addition the bright red slash of her lipstick and corresponding nail color sell the point that, well, everyone there secretly thinks she’s a whore.

While taking the dog out for an evening walk, Betty comes across a little domestic drama playing out outside Helen’s home. Her ex-husband is banging on the door and demanding to be let in. He sees Betty and asks if he can come into her house to use the phone. She refuses and walks back home. Later, Helen stops by. “I’m really sorry. I’m so embarrassed.” Betty answers unconvincingly, “I don’t know what you’re talking about.” Annoyed and a little taken back by Betty’s ridiculous attempt at a facade, Helen sharply answers, “Yes you do.”

Betty invites her in for a drink and they sit on the couch and have a somewhat uncomfortable conversation. Actually, Helen is quite comfortable; it’s Betty that’s fidgety and childish in this scene, as Helen recounts the why her marriage ended (he cheated) and tells her she knows the women in the neighborhood are all talking about her. Betty makes a weak attempt at denying this. Despite this, Helen is friendly and approachable with Betty. You can tell she just wants to be friends and is willing to overlook all the suburban housewife bullshit that Betty both represents and indulges in. Don comes home from work and Helen takes her leave.

Could they look any more different? Betty in her princess-like nightgown and robe and Helen in her practical slacks and cardigan. It’s notable that Helen has a job outside the home and Betty doesn’t. And while you’d never catch us saying that being a housewife isn’t work; the fact is, Betty doesn’t actually do that much housework. She can afford to lounge around the home in the early evening dressed like this. Helen can’t. Now, why Helen’s outfit matches the Draper living room almost exactly? That, we couldn’t say. Perhaps it’s meant to tie Betty and Helen closer together. As we said, Helen is both a warning and a wish to Betty. 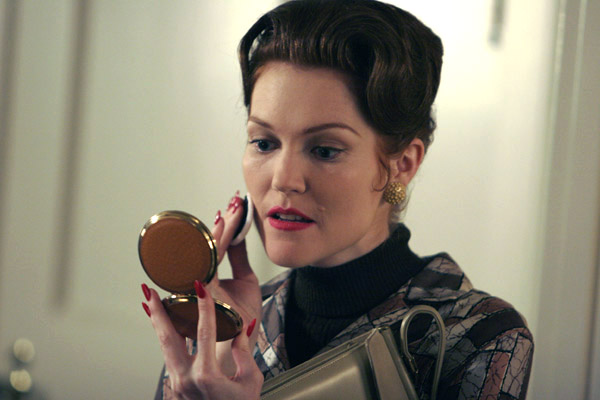 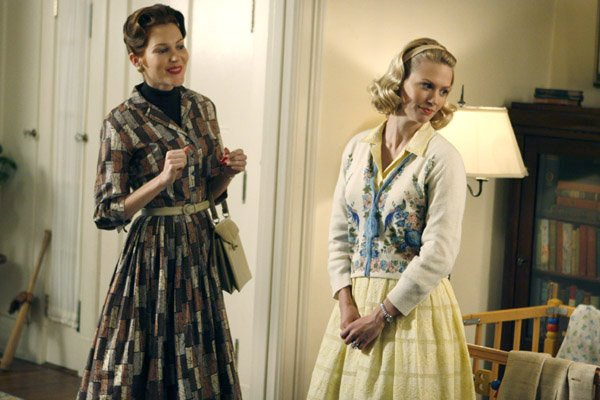 Helen, mistakenly thinking she might have a friend and ally in Betty, calls her up and asks her if she might watch her kids for a couple of hours while she stuffs envelopes for the Kennedy campaign. Betty is put out and doesn’t do a very good job of hiding it. Helen tells her “never mind” and Betty, probably realizing on some level how unkind she’s being, agrees to come over to watch them. When she gets there, Helen is running around trying to put her outfit together and apologizing for her sloppy house. While discussing the campaign with Helen, Betty reveals that she’s not sure who she’s going to vote for. Helen promises to bring some literature for her to read.

Glenn Bishop is infatuated with Betty (because she’s the very picture of what a mother is supposed to look like according to the media images of the time) and asks her for a lock of her hair. Betty can’t say no to any male who pays her any attention (since she gets almost none from Don) and gives it to him. Later, Helen comes home, full of gratitude, Kennedy literature in hand.

Betty is the picture of 1960 maternal perfection in a soft yellow, with a pretty headband and cardigan. Helen is dark, with an unflattering hairstyle, heavy makeup, and a discordant print on her shirtwaist dress. Since female characters are so often tied to their surroundings on Mad Men, it’s fair to say that each of these outfits represent their own homes. Betty’s is perfect on the surface and Helen’s is something of a mess, with the darker aspects unhidden, bared for everyone to see. Betty would rather die than let a guest see a standing ironing board in her living room. Helen is the type that shrugs and says “Sorry about the mess.” 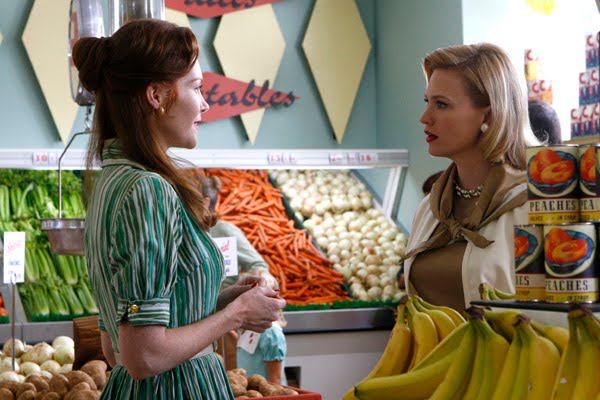 Helen and Betty come across each other in the supermarket. Helen is cold toward her until Betty asks about Glen. “I wasn’t going to say anything,” says Helen reluctantly and then asks her if she gave Glen a lock of her hair. Betty admits to it. “He is 9 years old. What is wrong with you?” Betty, who is deep in the throes of her housewife angst, slaps Helen and walks out.

Again, we looked at this scene from Betty’s perspective and at the time, we talked about how flawlessly put together she is, even for the times. Looking at it now, we’re struck by the fact that they’re standing in a produce section and Helen’s in bright, lively shades of green, while Betty is in shades of brown. Implication? Helen’s life may be a bit messy, but she’s alive; Betty is perfectly preserved, but dying inside. 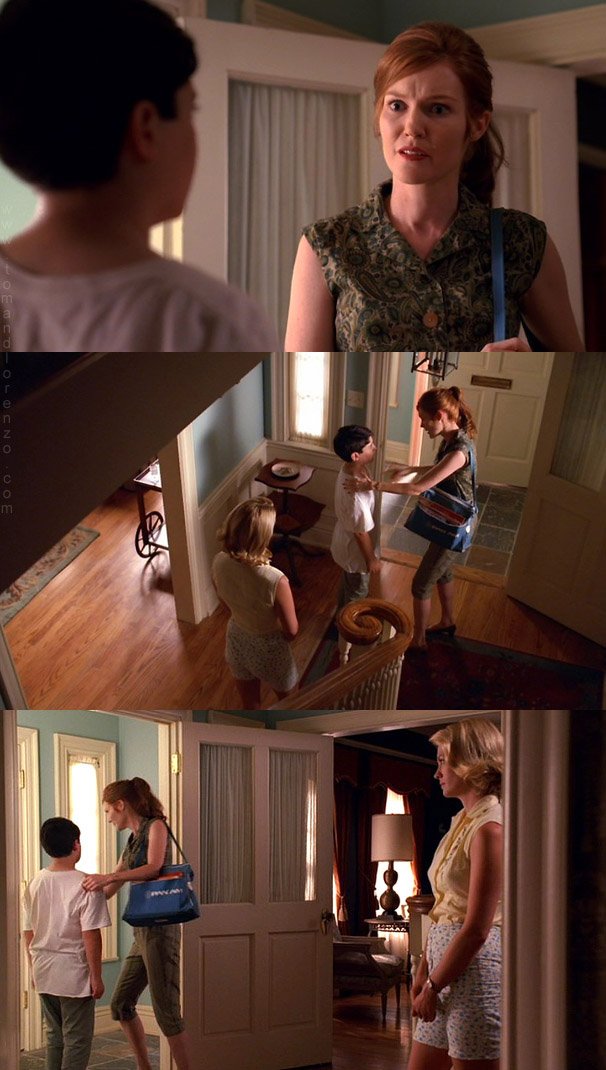 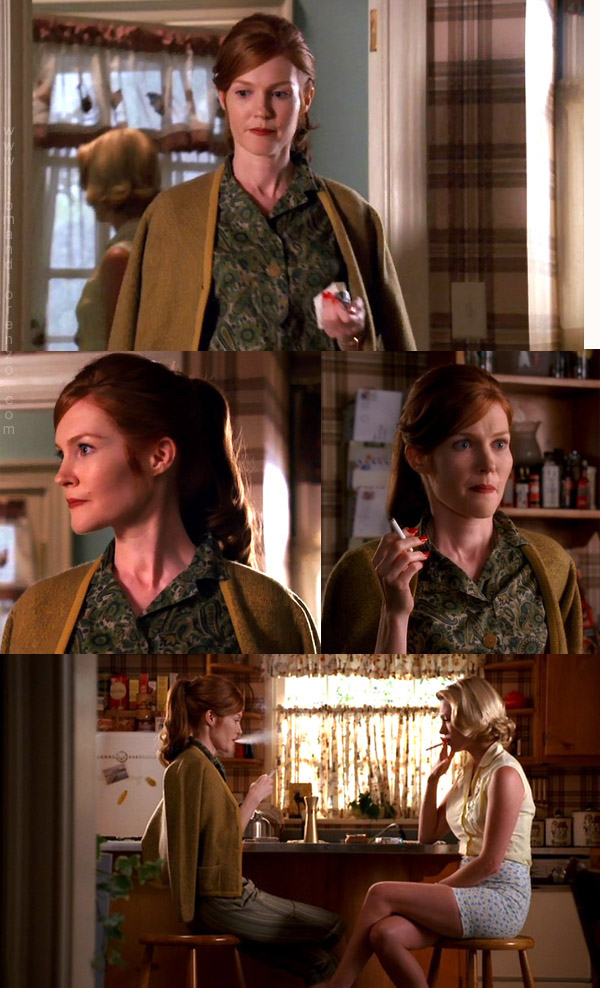 The following summer, Betty finds Glen living in the playhouse in her backyard. He’s run away from home. His mother has a new boyfriend. Betty invites him in and fixes him lunch. “I came to rescue you,” he tells her. “We can go anywhere. I have money.” Instead she sits to watch cartoons with him and then sends him upstairs to play with her kids. Later, Helen arrives because Betty called her. Glen feels betrayed and tells Betty he hates her. They leave.

Later, Helen comes over again, barges her way past Betty into the house and says, her fury barely under control, “Betty, I’m sorry, but we really need to talk.” But this is a different Betty from the nervous housewife who slapped her in the produce department. She’s in the middle of her own domestic drama because she kicked Don out of the house for one too many infidelities. Betty’s not having Helen’s rage. “Glenn feels alone. Honestly, I don’t blame him,” she says to Helen. “You’re supposed to be taking care of him. You’re his mother. And he gets nothing.” The very worst thing you could say about a woman in 1962 suburbia is that she’s a bad mother (sadly, that’s still a little true). Helen is defeated. “I’m not a very good mother anymore.”

Probably as a way of reaching out to her and probably because she needed to tell someone (and Francine wouldn’t have been a good candidate), Betty blurts out, “Don isn’t living here.” Helen is shocked. They sit down and light cigarettes. “Is it over?” she asks. “I don’t even know,” Betty replies. “That’s the worst,” says Helen knowingly, adding, “The hardest part was realizing you’re in charge.”

We loved this scene because all of their previous scenes had them dancing around each other, not quite saying what they should be saying. Here, they’re (in 21st Century parlance) keeping it real. There’s finally a connection between these two women; an understanding and sympathy. Sure, their outfits don’t exactly match, but tonally, they’re equals. They’re both dressed down; neither looks more or less dressed up than the other. In addition, Betty’s showing a lot more skin than Helen is. Betty’s finally laying herself bare before her.