Home » Television » Mad Style: S4E2 Christmas Comes But Once a...

Mad Style: S4E2 Christmas Comes But Once a Year

Get out your shiny dresses and plaid tuxedos!

Here’s Allison as the perfect secretary, both efficient and comfortable in her role as “office wife.” Outfits like this were worn by women long after they went out of style. We entered the workforce in the mid-eighties and older secretaries were still dressing pretty much exactly like this. Subsequently, to modern eyes, an outfit like this reads as dowdy and matronly. In 1964 it would have been considered a cute work outfit. Feminine and colorful but nonetheless respectable.

We loved this dress, although we have to say, it doesn’t strike us as up-to-the-minute fashionable. We’ve never had any reason to examine Allison’s clothes before, but she’s somewhere between Joan and Peggy on the fashionable scale. She seems to always look presentable and even cute, but she doesn’t really step away from being a respectable girl.

How is it that green and blue worked so well together in the ’60s?

How sad are these shots? We still maintain that a large part of Allison didn’t expect a relationship with Don. Her pain was not because he didn’t sweep her of her feet but because he swept the whole thing under the rug. It’s one thing to say “That shouldn’t have happened.” It’s quite another to say “That never happened.”

Anyway, here she is in another respectable plaid jumper and somewhat exuberant blouse. She’s switched out the pussy bow for a lace-trimmed scarf detail. She couldn’t possibly look sweeter or more innocent here. Most notable of all, she doesn’t look anything like the women Don goes for, not the girlish Suzanne or the fabulous Bobbie or Rachel, not even beatnik Midge. None of Don’s conquests dress like this because Don has always had strict rules about shitting where he eats. 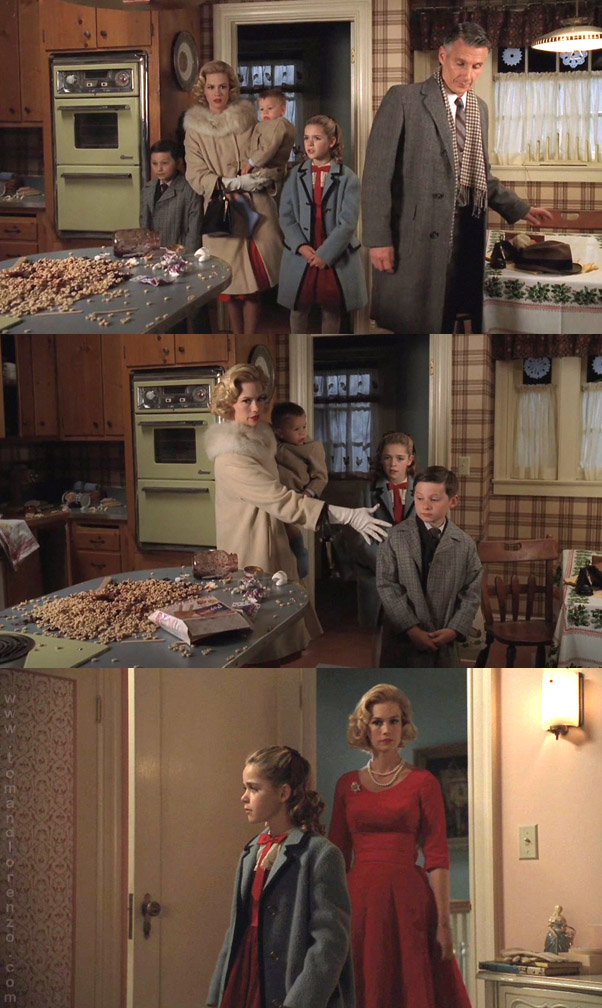 We didn’t see Betty’s Christmas party outfit for more than a few seconds. That dress is gorgeous – and quite different from the mature Chanel suits she was wearing last episode, which makes us wonder if this is her “Christmas dress” and she’s had it for a couple years.

The coat with the mink collar instantly adds ten years to her age, though. 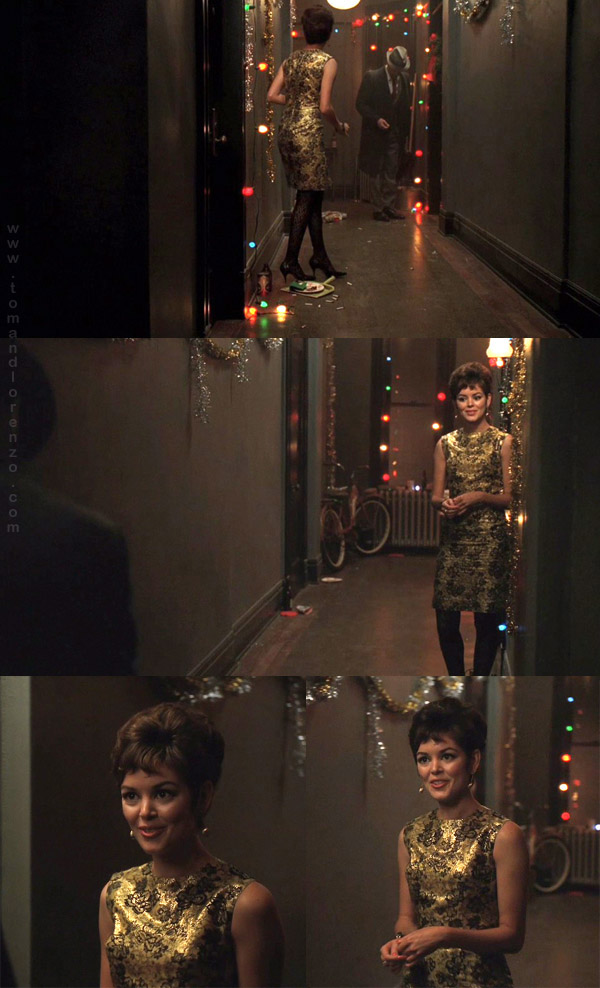 Apparently metallics were big in December 1964 because suddenly they were all over this episode. We’ll get to the why of that further down. Note the patterned black stockings, something we have never seen before on this show and a herald for the wilder mod styles to come. Also, suddenly dangly earrings are everywhere. 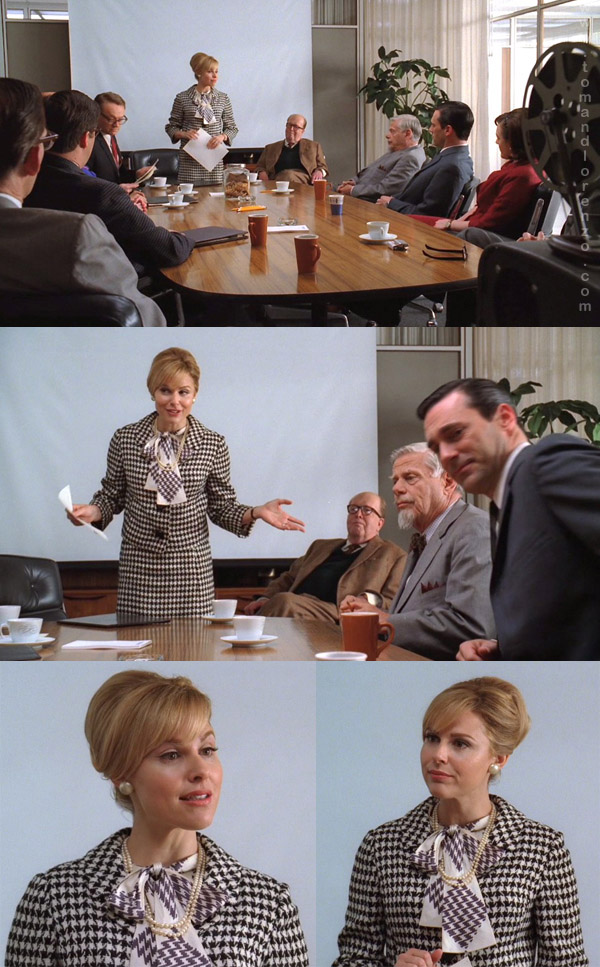 Dr. Miller’s office outfit was an intentionally distracting look which reminds us of the Op Art painting on Roger’s office wall, the one that Freddy said felt like it was sucking him in. She represents a newness and modernity, a philosophy of advertising totally at odds with the old way of doing things but one that will have an enormous (and somewhat frightening) influence on the industry. It was in the mid to late ’60s that advertising took a huge leap forward in sophistication and in its ability to manipulate the emotions of the public. Dr. Miller’s style of psychological research had a lot to do with that. 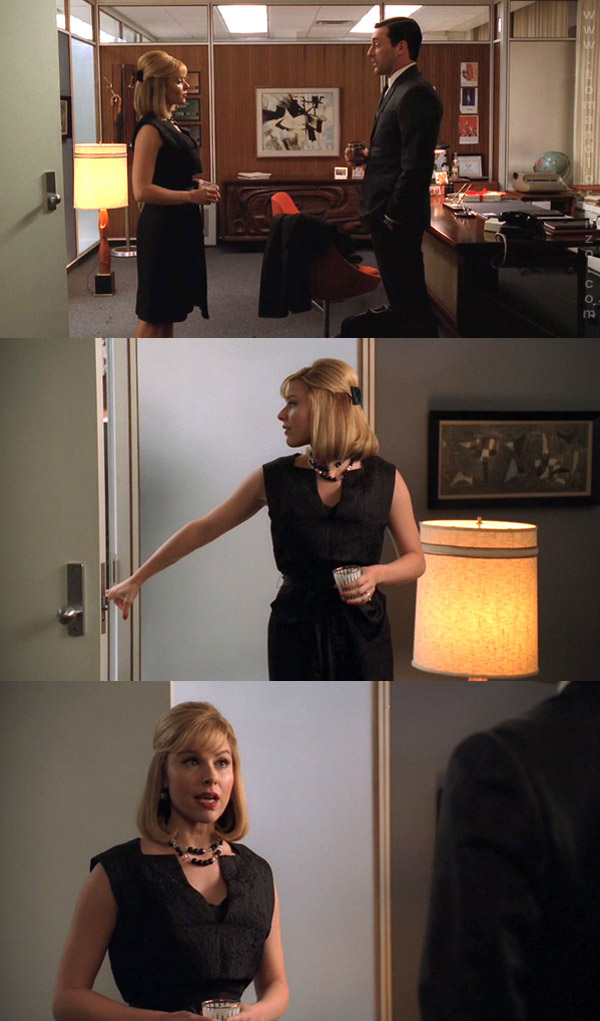 Two columns of black, facing off against each other. It’s jarring, because the only blonde we’ve ever seen with Don was Betty and this is a TOTALLY un-Betty-like outfit. Note how the neckline mimics the collar and lapel of a men’s suit and how the cut emphasizes her shoulders. She may be a pretty little blonde, but she’s no slouch and she can go toe-to-toe with Don. 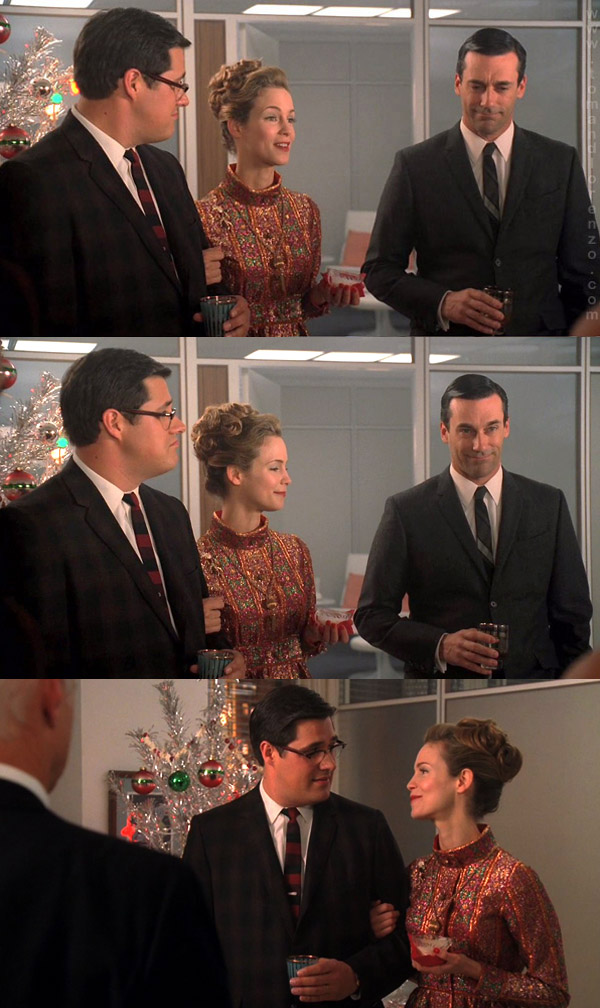 Mousy Jennifer Crane really updated her look since we last saw her. Another metallic dress; this time, the colors are bold and even clash a little; very mid-sixties with the high collar and what looks like an A line skirt. 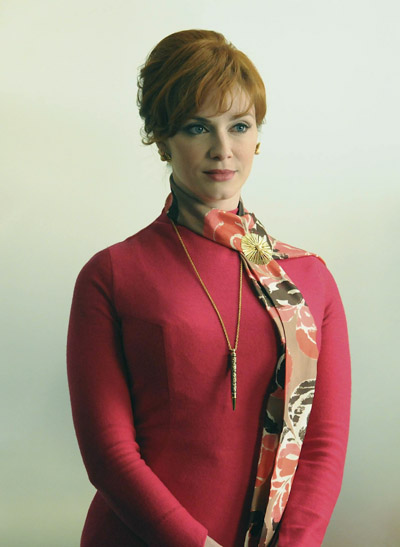 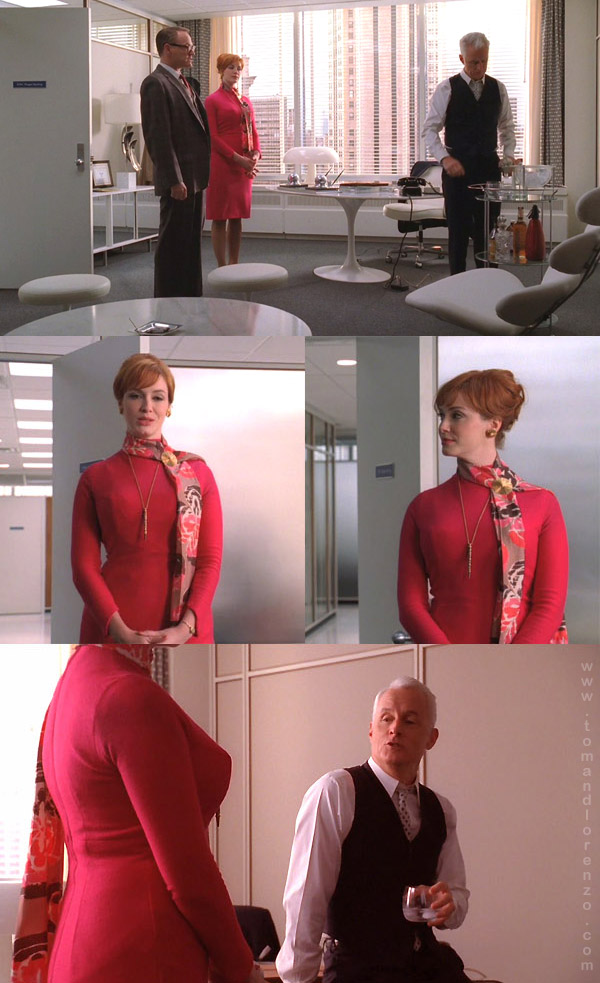 God, what a fabulous look. The only time we ever saw Joan this covered up, she was also dealing with a former office affair who can’t seem to let go. We’re talking about her scene with Paul after the 1960 election. As in that scene, the message here is that she’s off limits and needs to remain discreet in the office.

Still, it’s bright pink with a mod pattern. Even Joannie has to embrace the newer styles.

But that doesn’t mean she won’t return to an old favorite when it suits her. As gorgeous as this dress is and as incredible as she looks in it, it’s very much of her wardrobe from a couple of seasons ago. She could have worn this in season 1 or 2 and have it fit right in, but from what little we’ve seen of her wardrobe this season, this isn’t really her style anymore. 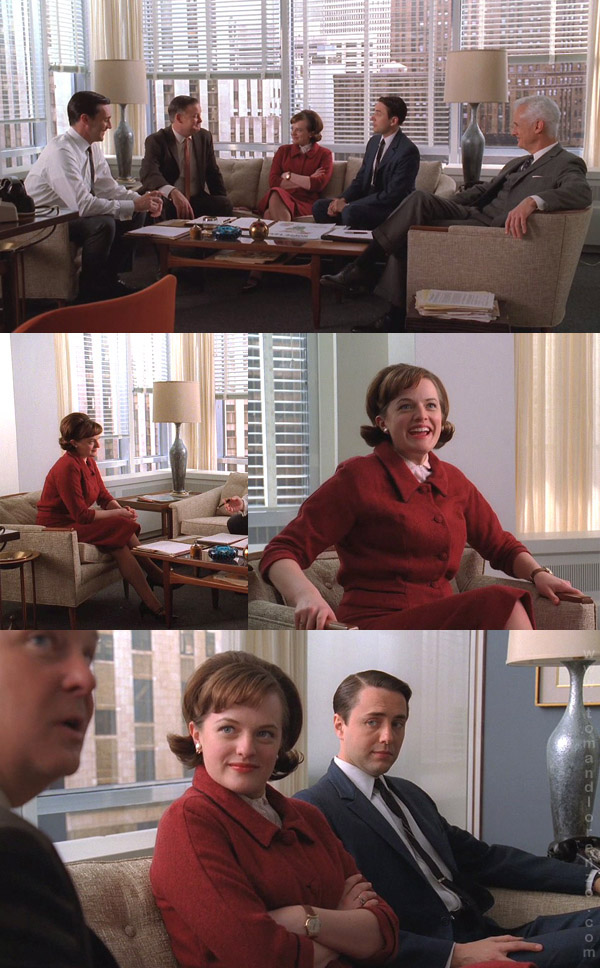 Who stands out the most in these shots? Peggy and her red suit, of course. She’s got a very youthful hairstyle topping off a mature, professional look and of course, it’s in a Christmas red. 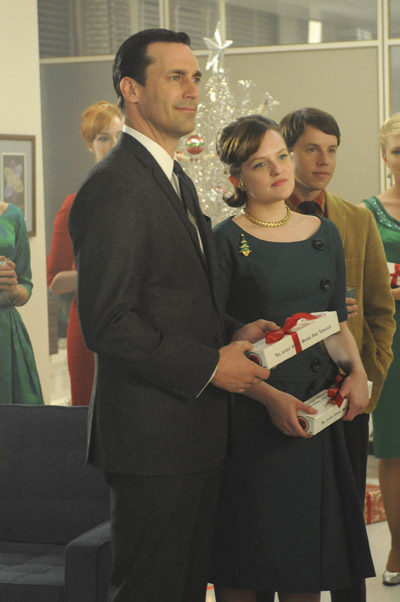 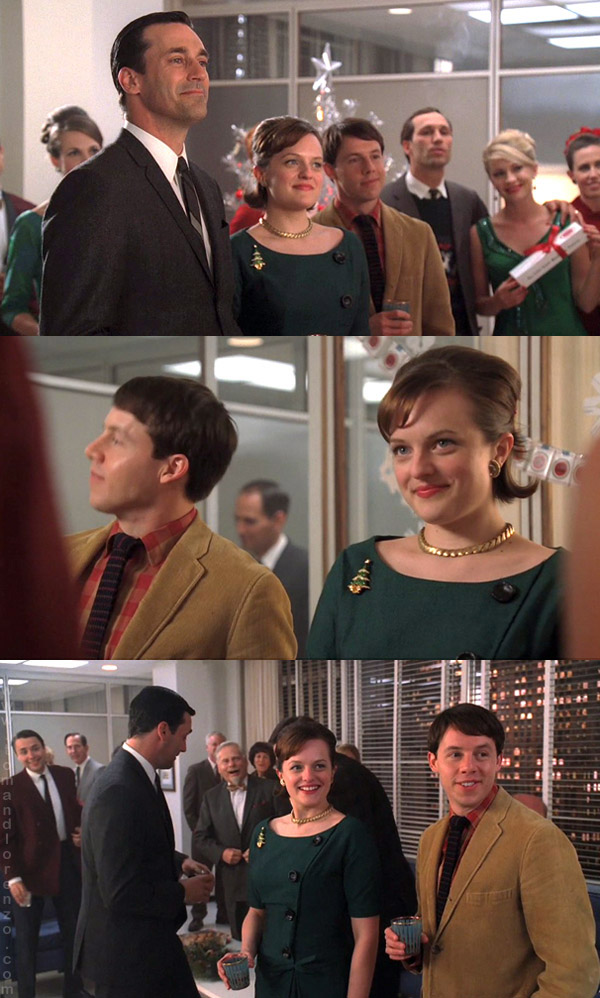 This might be one of our favorite Peggy outfits. We love the Christmas tree brooch. Tom’s grandmother had one exactly like that. Peggy seems to be spending a little more money on her clothes now. The fabrics look more expensive even if she still hasn’t quite figured out proper fit. That dark green was an early ’60s mainstay. And boyfriend Mark’s corduroy jacket was a uniform for male college students throughout the ’60s. That heavy gold chain of Peggy’s is highly unusual for her. Nice to see her rewarding herself for all her hard work. You can’t tell us that nebbishy Mark got that for her.

We would like those vintage lowball glasses they’re holding, please.

Looks like someone went to see Cleopatra last year. The 1963 Taylor/Burton extravaganza had a major impact on women’s styles of the period, leading to much heavier eye makeup, more obvious jewelry, and more metallic elements in the clothing (hence, all the metallics you’re seeing in this episode). The elaborate neckline here was very much of a piece with the Egyptian-inspired fashion fads of the time. She looks freaking incredible here and she doesn’t look like she’s trying too hard, which is how she looked immediately after she married Roger. Jane seems to be figuring out her own youthful style and as we saw with Roger’s office, she’s very much in tune with what’s going on at the moment. 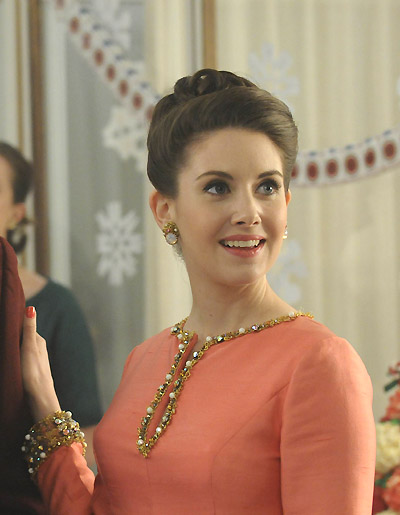 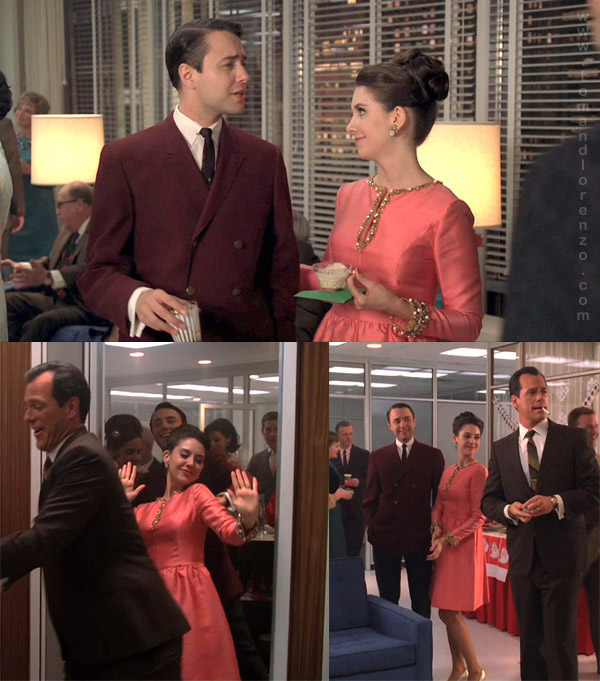 Trudy, on the other hand, does it her own way. She seems to be settling into a stylish, grownup, less flashy look than Jane Sterling. Of course Trudy would wear a coral-colored dress at Christmas. She’d never be so obvious as to go for red or green. If you look at old Christmas cards, wrapping paper and ornaments from the period, you’ll see this shade over and over again. It seems odd now, but this really was a suitable Christmas color. Scroll up and look at the picture of Joan doing the conga. On the table, there’s a Christmas tree centerpiece made out of white and pink carnations.

She’s got the 1964 model big hair, along with the metallic touches in the shoes and around the collar and cuffs. She also looks fabulous. And once again, her outfit complements her husband’s. They’re a unified vision in shades of red. It’s highly unusual for Pete to wear a double-breasted jacket. He’s dressed to impress.

OHMIGOD. WANT SO BAD. The jacket, not the guy (although we’ll take the guy – that Joey is ADORABLE). Anyway, yes. Red windowpane plaid tuxedo jacket. Why oh why did this ever go out of style? 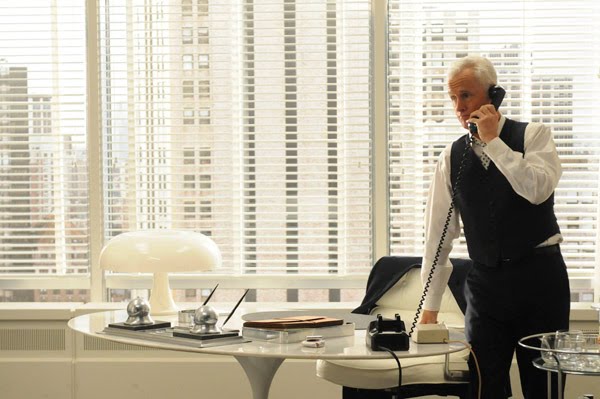 And finally, a look at Roger’s super-modern office, which was designed by his young wife Jane. We have to hand it to her, she’s definitely ahead of the trends here. In December 1964, this stuff was pretty much cutting edge. We did a little research, so let’s run it down.

And last but not least, the art is representative of the burgeoning Op Art movement, which was a term coined by Time magazine in October 1964, two months before the SCDP Christmas party. Of course Freddy would feel like he was being sucked in. The wildness of the ’60s is about to suck all of them in and old fogeys like Freddy are going to have a particularly difficult time dealing with it.