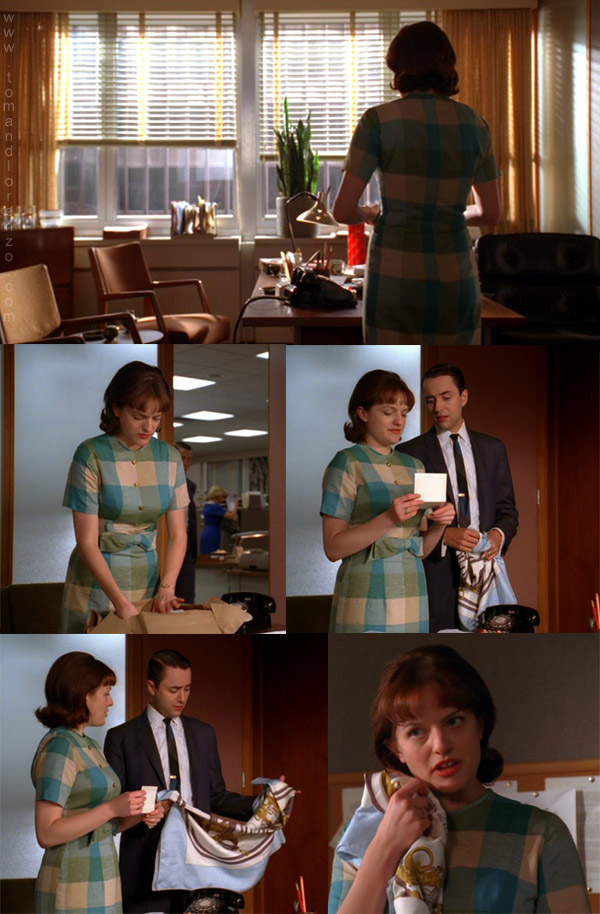 Pete and Peggy are nonplussed at the arrival of gifts from Duck Phillips; Cuban cigars for him and a Hermès scarf for her. You really get the sense of their inadvertent partnership with each other, the “secret relationship,” as Duck called it when he first attempted to woo them away from SC. They have a shorthand and a reluctant intimacy with each other that allows them to be a little more real and raw than they would be with other people.
This is the outfit she wore when she asked Don for a raise and he harshly turned her down. Her pregnancy is alluded to in that scene and while we wouldn’t say the content of this scene allowed for such allusion, the very fact that it’s the two of them and that their anger with each other stems from that very pregnancy, it’s hard not to think of the costume choice as a very deliberate one. Especially since it ties back to the other theme of that previous scene; Peggy’s feelings of not being appreciated on her job. 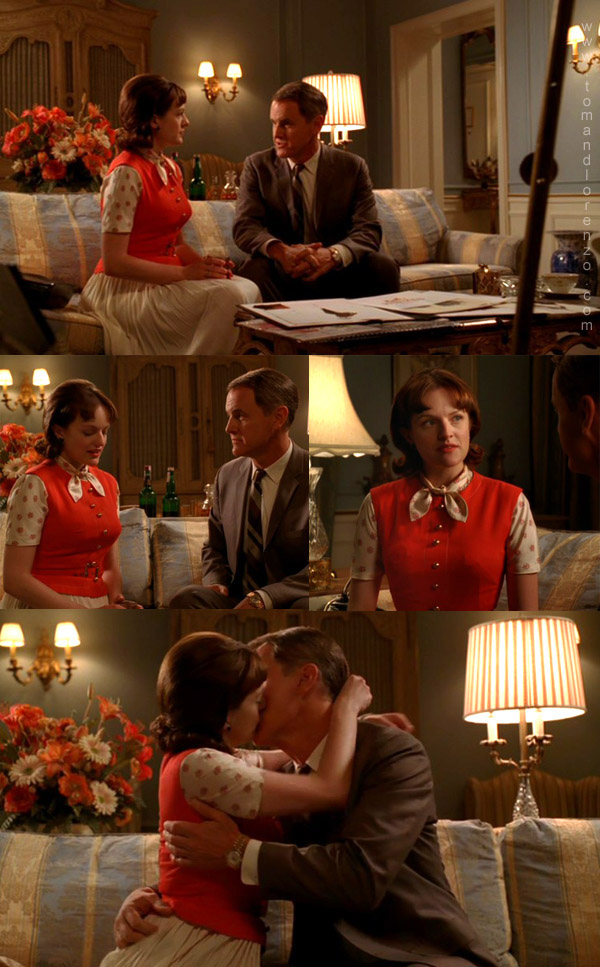 Peggy has quite the eventful day in this smart little getup. First, she calls Duck and tells him to stop sending gifts and that she’s sending the scarf back. He teases her that he won’t take no for answer until he has the returned scarf in his hands and invites her to meet him at the Pierre that evening. Afterwards, she takes some art into Don for approval and, needing to test her worth at SC, clumsily sends out feelers on the not-yet-landed Hilton account. He tears into her. “Every time I turn around you’ve got your hand in my pocket.” Put your nose down and pay attention to your work because there is not one thing that you’ve done here that I couldn’t live without.” She apologizes and leaves his office, humiliated.

Next thing you know she’s at the Pierre and ripping her clothes off for Duck, who made a serious play for her that she wasn’t likely to turn down given the day she had. She did tell him she couldn’t leave Sterling Cooper, though.

While we think there’s some meaning to be gleaned from the business-like style of the dress paired with the passionate red color, allowing it to reference both her career and her sexual side, we tend to think this outfit was likely chosen for more practical reasons: it’s so noticeable, so dominant in her scenes that instantly heightens any tension and leaves no doubt that she is at the center of all of this. This is all about her. Not Pete, not Don, and not Duck. It’s one of those character defining outfits. A relatively prim blouse paired with a vest and a pleated skirt that all reads as Peggy, but in a stark red and white that speaks of confidence (even in the face of Don’s withering anger) and Peggy’s kind of quiet sexual side.

Paul makes a cute pitch to Don for the Aquanet account, staging it (in Paul Kinsey fashion) like a play. Don starts running down the weak points and Peggy brilliantly course corrects and instantly offers alternatives that turn if from a cute idea to a terrific one. You can tell Don’s impressed with her. Later, Paul storms into her office and accuses her of stepping all over his ideas and making them her own. “You’re his favorite,” he says and she disagrees strongly, asserting that Don hates her. She pretty deftly counters most of Paul’s childishness and sticks to the Peggy credo of Just Do the Work and Avoid All the Bullshit, which has served her pretty well so far.

Paul makes a crack about how her gender has allowed her more opportunities than he’s had (which is a ludicrous thing to say) and tells her that her skirt isn’t going to help her with the Western Union account. Which of course makes the eyes go right down to her skirt, with it’s little feminine bow. The polka dot blouse is a bit of a step in another direction for her. The outfit would be cute if it had a little more color, but the point was to make her once again look like she’s juggling a career and her femininity, because the world wasn’t prepared to allow her both at the same time without difficulties.

Paul had a great idea for the Western Union account but forgot to write it down and lost it forever. Peggy commiserates with him and urges him to come clean to Don. Amazingly, after Paul tells Don the truth and Don gives him a sympathetic “I hate when that happens,” Peggy manages to spin the brief conversation out to a rather brilliant campaign for Western Union. Don is clearly impressed and tells her to run with it. Paul is furious with her.

She wore this dress most notably when she first got Freddy Rumsen’s office and had to put up with a lot of bitching from a bunch of the guys, including Paul. At the end of every season of Mad Men, the last 3 or 4 episodes, they start paying off all the stuff they established much earlier. Janie Bryant’s doing the same thing here, making this dress the “doing better than the men” dress.

Don brusquely orders Peggy into his office and informs her that he’s breaking off from SC and starting up his own shop. He then orders her to be in the office on Sunday night to collect her things. “You just assume I’ll do whatever you say. Just follow you like some nervous poodle,” she says, interrupting him. “I’m not gonna beg you,” he replies, frustrated. “Beg me? You didn’t even ask me.” Even after changing course and asking her, she still isn’t buying it. “I don’t want to make a career out of being there so you can kick me when you fail.” She declines his offer and leaves.

She’s had about enough of Don and his big bag of bullshit and she’s starting to realize how much she’s worth, what with first Duck and now Don trying to get her to come with them. Once again, Janie’s playing with old favorites. She wore this dress when she landed the Popsicle account all on her own and then boldly asked Roger if she could have Freddy’s old office. This is her “knowing her worth” dress. 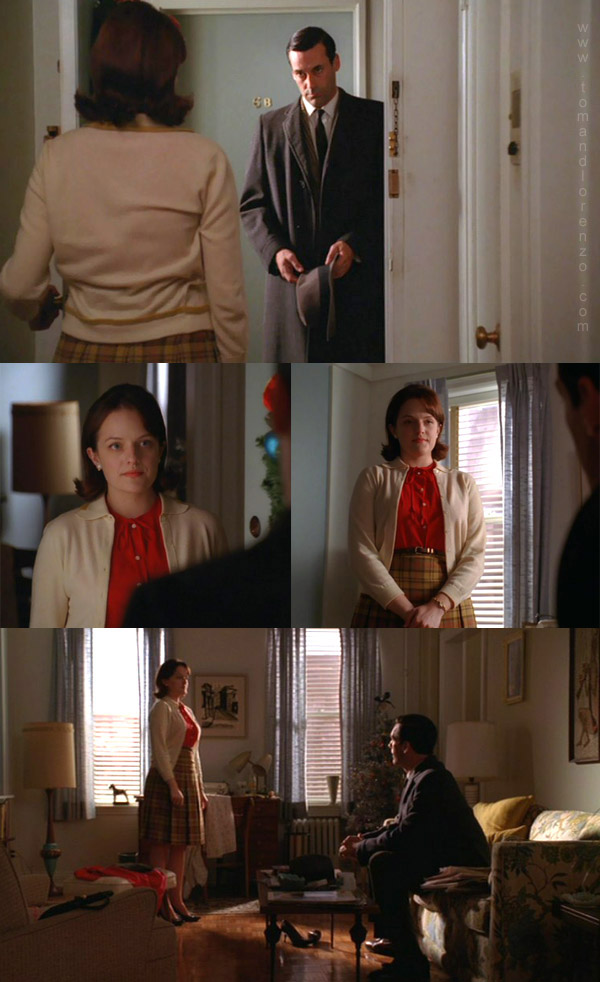 Don’s had a shitty time of it as every major character took a pound of his flesh. After a painful scene informing his kids of the divorce, he shows up, hat literally in hand, at Peggy’s doorstep. “You look awful,” she says bluntly. He sits down and tells Peggy that she’s valuable. She needs more than that. “Because there are people who buy things,” he explains. “People like you and me. And something happened. Something terrible. And the way that they saw themselves, it had gone. And nobody understands that. But you do. And that’s very valuable.”

Peggy noted immediately when Marilyn died what a disaster it would have been if they’d gone with the Jackie/Marilyn campaign. Peggy stayed in the office the weekend after the Kennedy assassination trying to figure out a way to make the approved campaign for Aquanet work even though it depicted two couples in a convertible. Peggy was broken and lost and lying in a bed in a psychiatric ward when Don came to her and taught her how to get up and move on. And she did move on, impressing everyone around her with her skill and hard work. Don understands her intimately. You could even say he understands her better than any woman he’s ever known. They’re not romantically interested in each other but this scene was every bit a romance, as he pleaded with her not to leave him.

“With you or without you, I’m moving on. And I don’t know if I can do it alone.”

“What if I say no? You’ll never speak to me again.”

“No. I will spend the rest of my life trying to hire you.”

Peggy had what she wanted most: recognition of her value and reward for her efforts. So what is she wearing? The blouse and skirt she wore when she got high and told Olive all her dreams and her absolute certainty that she was going to make them all come true. “I’m in a very good place now,” she said back then. And she’s wearing it here, where she finally is in the best place, the place she most wanted to be.