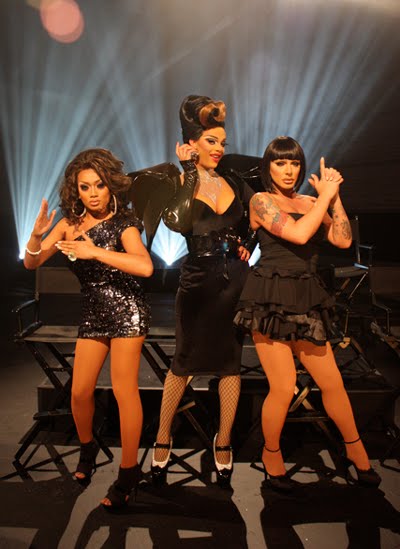 Darlings, slap on your wigs and eyelashes because tonight we find out who gets to be America’s next drag superstar.

In almost equally important news, LOGO Online will be hosting a live chat of the 2 1/2 hour dragstravaganza with a host of luminaries including two world famous and highly attractive bloggers with a predilection for going out in public dressed like cowboys. Namely, us. LOGO? Don’t you have a press release for this sort of thing? We need to rest up for tonight. Ah, here it is:

The party starts at 9/8c as we air the season finale, Untucked! and the reunion special. It’s a whole 2 and a half hours of drag madness tonight!

Tune in to LogoTV.com tonight for the massive ladyboy-fest that will be the Season 2 Finale of RuPaul’s Drag Race. From 8:30pm – 10:15pm ET John and Jon will be broadcasting live online from the Drag Race Finale event here in NYC. They’ll interview the 3 finalists, plusPandora Boxx,Sahara Davenport and more!

And also during the finale tonight, you can join a Live-Blogging Finale Event CHAT at LogoTV.com featuring Michelle Collins of BestWeekEver.tv, Tanner Stransky of Entertainment Weekly, Jarett Wieselman of the NY Post’s PopWrap blog, Rich Juzwiak of VH1 Blog, Tom and Lorenzo of Project Rungay and others!”

That’s right, bitches! You’ll be getting our opinions in real time! Of course we’re gonna haver to push all those other bitches out of the way so they don’t steal focus from us but that shouldn’t be hard. Besides, it’s in the spirit of the competition. Better brace yourselves!