We’ll get to the usual long-winded examination of themes and motifs in a minute, but first… 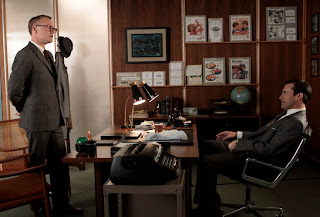 LOIS STILL HAS HER JOB?!? What does it take to get fired from Sterling Cooper? Aside from refusing to have sex with a client, we mean.

And now, a long-winded examination of themes and motifs. Wait, no. One more thing.

Mad Men is usually such a slow burn but there are a handful of hand-to-the-mouth, ohmigod-I-can’t-believe-that-just-happened moments in its history, like Peggy going into labor, Peggy telling Pete she had his baby, an unexpected amputation in the middle of the office and now this. We honestly thought that Don’s secret life was one of those things that was always going to sort of hang over the show, with maybe a resolution some time around the final season. And while we are far from a resolution, the story suddenly sped up and rocketed forward to a point we didn’t expect to see for some time to come. 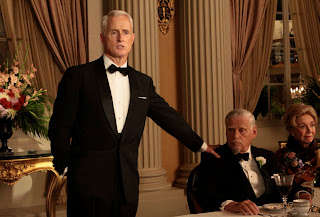 And we’d just like to take a moment to address the oft-voiced notion that January Jones can’t act. Puh-leeze. The look on her face as she discovered the truth should put that little meme to rest. And speaking of discovering the truth, what exactly does Betty know? What could she possibly be thinking? We can’t imagine that she has an accurate picture based on the contents of that box. Two sets of dog tags, a picture of Don identifying him as Dick, and a divorce decree. Clearly, she’s figured out that he’s been lying to her for as long as she’s known him but how much of the lie does she actually understand?

Of course, there’s the other big question this revelation is forcing: what is she going to do with this information? We had a slight disagreement while the show was airing. Tom said 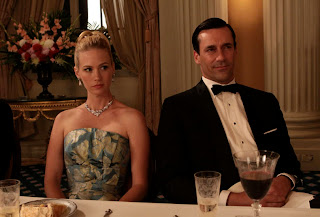 “She’s not going to do anything yet. She’s not very good at confrontation.” Lorenzo strongly disagreed and cheered the scenes of her staying up with the box on the kitchen table, waiting for Don to come home, smoking and drinking furiously. But in the end, for whatever reasons, she not only chose to put the box back, she chose to put the key back, covering her tracks that she ever discovered it at all. Is she just going to let this information simmer with no payoff before the season ends. Please, writers. That would just be too cruel to us.

In other Betty news, we were cheering on Henry Francis when he basically told her to fuck off if she wanted to play games with him. We’re starting to really like that guy and we’re even more committed to the idea that he just might be the right guy to handle Betty’s childishness. What could illustrate the sad state of the Draper marriage better than Don and Betty’s reaction to a simple hangup? They both thought their paramour was on the other end of that line.

And speaking of paramours, we’re more convinced than ever that this thing with Suzanne is going to end very badly. Not only is she blithely unconcerned with the boundaries and 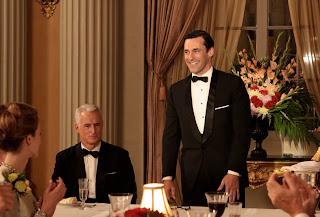 realities of the situation, but Don is flirting more and more with having the whole thing blow up in his face. Not only is he continuing to spend the night at her place, car parked outside only two miles from his own house, now he’s given his card to her slightly less than stable brother, telling him to call him if he needs help. Now, don’t jump on us. We’re not saying the guy’s unstable because he had epilepsy. We’re just saying that he gave off a slightly dangerous vibe and he’s clearly not planning on living his life within the boundaries laid out for him. He’s a hobo like Don is and he’s a hobo who has some very damning information that desperation may force him to use at some point down the road.

We understand why Don wanted to help the guy out. He reminded him of his own brother and he screwed up that relationship so badly that the kid wound up killing himself. Don’s trying to make amends in his own way but like we said, we have a feeling it’s not going to play out the way Don hopes. On the one hand, it’s admirable that Don’s trying to do the right thing; on the other hand, we can’t really crown him a hero when he’s got a drawer full of running away money that he keeps hidden from his wife and children. Face it: Don Draper is one fucked up guy.

In fact, we can’t shake 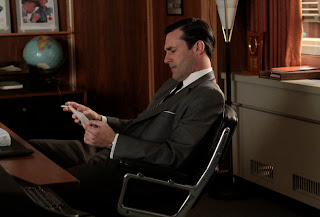 the feeling that this episode showed us the final ascendancy of Don Draper. It ended with Don looking fabulous in a tuxedo in a room full of applause and admiration, but it’s all downhill from here. He’s locked into a contract with a company that’s about to be sold again and his beautiful and glamorous wife now knows the one thing he never wanted her to know about him: he’s a fraud and a liar. He may look like the stud that everyone wants to be or to know, but in reality, he’s fucked and he doesn’t even realize it.

In other news, it was nice to be reminded that Peggy is almost supernaturally good at her job. We feel a little sorry for poor, pompous Paul Kinsey. And let’s face it, he was written to look as pathetic as they could make him. Drunkenly stumbling through the office in search of an idea and jerking off at his desk to his failed Maidenform pitch of last season. To top it off, not only was he unable to produce an idea for the Western Union account, he had to sit through Peggy taking his lack of an idea and spinning it off to a great idea right in front of his (and more importantly, Don’s) eyes. In a way, it was of a piece with the general theme of this episode, which if you haven’t figured out by now, was mostly lacking in themes and motifs and instead was all about plot. Don is, on the surface, everything that 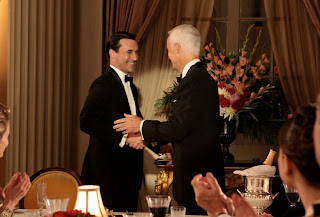 anyone could ever want to be and he looks like he’s right on the precipice of taking a huge fall, both personally and professionally. Paul is, on the surface, perfectly primed for the kind of success he feel is owed him by virtue of his pretensions and ivy league education and yet he continues to get upstaged not only by a woman, but by a woman who doesn’t have the benefit of his own background and education.

We’ve probably missed a lot of points worthy of discussion so you’ll all have to fill that in in the comments section. For now, we’re happy to sit on the edge of our seats wondering what the hell is going to happen next and begging the writers not to leave us hanging before the season in ends in just 3 episodes.