As far as we’re concerned, the show gets a little tighter with each episode and last night’s was the tightest yet. Plot, character motivations and music all 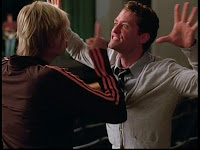 combined flawlessly. For once, we didn’t have a “What the…?” moment. It all made sense. We had hopes that the show could eventually pull this off. They’re trying to do a balancing act and so far, they’ve never quite achieved what they achieved last night. Sure, most of the plots are wholly implausible, but at least they make a kind of internal sense for the show.

There’s a lot of criticism of the character of Will’s wife Terri and in a way, we kind of feel sorry for the actress playing her because we think she’s doing a really good job in an almost impossible role. Yes, she’s annoying and self-centered and the 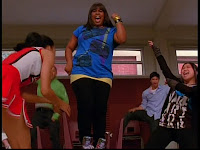 fake pregnancy plot is completely implausible, but when she grabbed Will’s face during the fake ultrasound and implored him to remember this moment and remember that they loved each other, it played really well. You could feel her desperation to keep her marriage together and the insane lengths she’s gone to to make her husband happy. Obviously, it’s not going to end well but we can’t deny we’re insanely curious to see how they’re going to wrap this one up.

The show is also doing a damn good job of taking cliches like the bitchy cheerleader and turning it on its head. Quinn not only got a great little musical number with the Supremes’ 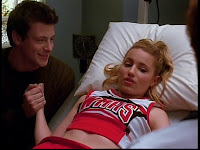 “Keep me Hangin’ On,” she also got some great character moments as well. The final number, an emotional rendition of “Keep Holding On,” wherein the entire glee club basically pledged to be there for her was …well, we’re not ashamed to say we teared up a little bit and that was due almost entirely to her performance. When she looked down lovingly at Artie, of all people, we totally believed it.

Here’s a question we want to throw out to you to hash out: Most of the time, the show’s musical numbers occur in-story, meaning it’s a scene where the characters are supposed to be singing or performing. Every once in a while they go the 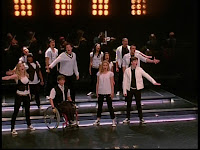 fantasy route, wherein the characters walk around singing at times when no one would do so in real life. They did this with Rachel’s version of “Take a Bow” a couple episodes back and they did it twice last night with Quinn’s number and again with Rachel and Finn’s duet of “No Air.” Does it bother you when they do it? Does it take you out of the show? Frankly, we don’t mind it at all but we love classic musicals, which tend to trade in that sort of technique constantly. We know some people find it a bit too unrealistic and it takes them out of the story. What say you, minions?

As usual, Sue Sylvester was on fire last night, getting almost all the best lines. It’s also nice to see 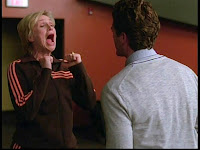 that the writers are finally realizing that Will isn’t the goody two-shoes he likes to think he is. He’s as inappropriate around those kids as Sue is.

To wrap it up, our favorite lines followed by our favorite numbers. Actually, we really wanted to post Mercedes’ version of “Hate on Me,” not just because we loved it but because we’re happy any time they yank the mike away from Rachel. Don’t get us wrong, we think she’s got a stunning voice, but so do several of the other cast members, Mercedes most notably. Unfortunately, we can’t find a video of this number on line. Found it!

“I empower my Cheerios to be champions. Do they go to college? I don’t know. I don’t care. 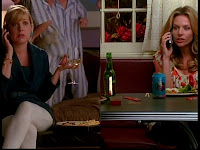 Should they learn Spanish? Sure, if they wanna become dishwashers and gardeners.”

“I don’t trust a man with curly hair. I can’t help but picture little birds laying sulfurous eggs in there, and it disgusts me.”

“I can’t stand the sight of kids getting emotional, unless it’s from physical exhaustion.”