It’s not that the above quote really illuminates this episode so much as we just think it’s a fantastic quote. The theme this week was prisons; from the Sing Sing guard who shared his fears and promises to Don in the waiting room to Betty’s suburban hell to Peggy’s corporate one, it was all about people trapped both figuratively and literally this episode.

The Drapers pay a visit to Sally’s teacher who we last saw traipsing barefoot through the grass on May Day. It seems that Sally’s acting out in school, getting into fights, and asking a lot of questions about Medgar Evers’ murder. Sally’s reacting not only to her repressive home life, but also the quietly exploding 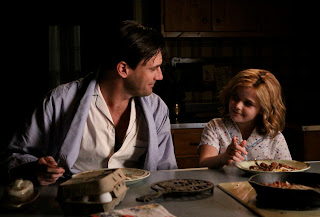 world around her that no adult seems willing to acknowledge, let alone explain. Betty doesn’t want to deal with it. In fact, Betty doesn’t want to deal with anything, not even her own emotions. “I’m not as upset as I look,” she says to Miss Farrell, in reference to her own father’s death, a sentiment that reveals that appearances are more important than feelings. She rushes out of the room and Don and Miss Farrell have a moment. Once again, Don reveals a bit of himself to a stranger rather than his own wife, admitting that he knows what it’s like to lose someone important as a child.

Back at Sterling Cooper, Lane Pryce is bringing the hammer down on corporate spending. “Pennies make pounds,” he says, further utilizing his P’s by bemoaning the overspending on paper, pencils, pads, paperclips, and postage. Don’s not having it and the two of them go head to head in Don’s office. Pryce seems amenable to Don’s ideas of getting clients to spend more money on television advertising in order to fuel creative’s needs for their P’s. These two have an interesting relationship. It’s adversarial, but not as much as the relationship between Don and Duck was. Pryce seems to defer to Don out of respect. 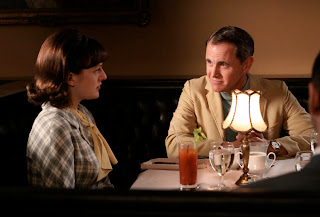 Miss Farrell drunk dials the Draper home and, bra strap slipping, reveals a little more of herself to Don than is probably appropriate. He seems bemused and hangs up, turning to find Betty packed and ready to go to the hospital. “It’s time,” she says, and we get an ever so brief glimpse of a flummoxed Don.

The ladies of a certain age in our readership could do a better job of determining this than we ever could, but it seems to us like they did a good job of depicting how horrifying childbirth really was for women back then (based solely on the stories our own mothers told us). Betty is quickly whisked away from her husband and drugged into oblivion, waking up to find a baby in her arms, having no idea of how things went or even what gender the baby is that she’s holding. During her “fog,” she has a series of dreams and hallucinations 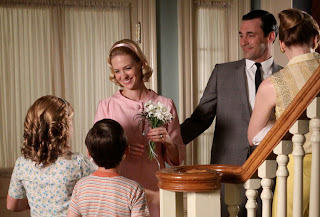 depicting both her fears and her hopes. Walking through an idyllic suburban paradise (all lush lawns and trees but curiously, no houses), she stops to let a caterpillar slowly descend into her hand. She smiles and closes her hand around it. Is she crushing it or capturing it? Later, she walks into her kitchen (and we’re not entirely sure about this, but we think they flipped the image on this scene so that everything’s opposite from where it’s supposed to be) to find her father dressed as a janitor and mopping blood all over the floor and her mother, sitting at the kitchen table tending to a wounded Medgar Evers. “You see what happens to people who speak up?” asks her mother. “You’re a housecat,” adds her father. “You’re very important with little to do.” Betty, tragically, is a product of her parents; trapped in a life where she has no power and fears being severely punished for voicing her discontent. 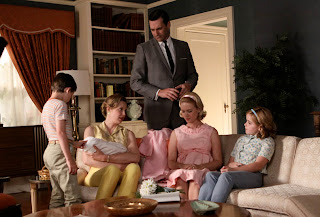 “That’s a bullshit excuse.” We have no doubt how Don would feel if Betty were self aware enough or strong enough to voice this. He meets a prison guard from Sing Sing in the waiting room and they get to discussing prisoners while waiting for their children to be born. The guard tells Don that most of them blame their parents for their lot in life and Don, ever the self-made man, rejects the idea. Of course Don is just as much a product of his parents as Betty is except he spent his life running away from them and she spent her life trying to live up to them. The two men bond, and much like Betty in her dream state, inadvertently reveal their hopes and their fears. Actually, that’s not quite true. Don sits and listens to the other guy’s hopes and fears and says practically nothing, but we know he feels mostly the same. Especially when the guy declares that the birth of his son will be a catalyst to him being a better man. We don’t know if he ever voiced it quite the same way, but Don recognizes something in the other man’s promise; something we suspect he doesn’t quite believe is possible.

Back at Sterling Cooper, Pete, ever the inadvertent forward-thinker, makes a pitch to a client that’s so revolutionary, he doesn’t even realize it’s revolutionary. He figures out that Admiral televisions are selling in predominately black areas of the country and tries to figure out a way to get an ad pitch out of it. Because the only black people he deals with on a personal basis are basically servants, he tries to strike up a conversation with Hollis, the elevator operator. “We’re just talking,” he says. “It’s just Hollis and –” “Mr. Campbell,” says Hollis, pointedly. One of our favorite things about this show is the way in which it deals with some of the biggest issues of the day. They’re just background to family and business problems for this exclusively white, exclusively middle to upper-middle class cast. Southeast Asia? That’s just a monk on TV setting fire to himself while a family grieves. Civil rights? That’s just a way to sell televisions.

Pete pitches the brilliant (for its time) idea to Admiral that they should run ads for their product in black media like Ebony and Jet. What makes it even more revolutionary is the idea that they should run the same ads they run in more traditional media. Integration via advertising. “Isn’t that illegal?” asks the timid client. Of course it’s not but the client isn’t buying it. Not because they don’t think it’s a valid idea but because they simply don’t want to be known as the company that sells “colored televisions,” which, you have to admit, is a pretty brilliant turn of phrase dreamed up by the writers. Pete gets hauled into Bert Cooper’s office and Roger rakes him over the coals. Typical for Sterling Cooper, both Roger and Bert don’t see what’s right in front of them and it takes Lane Pryce, a self described “stranger in a strange land” to point it out to them. “There’s definitely something going on,” he tells them. “We’ll look into it,” Bert says dismissively. Honestly, we can’t wait to to see the full weight of the sixties come crashing down on some of these people. 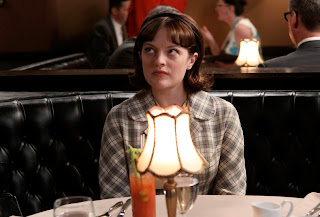 The late lamented Duck Phillips takes Peggy and Pete out to lunch, the other person’s presence unbeknownst to the them until they arrive. Both of them are deeply uncomfortable being around each other and we finally get an answer as to how they’re dealing with Peggy’s bomb drop of last season’s final episode. Basically, they hate each other now and we really can’t blame them for that. Duck tries to get them to come over to his agency and woos them with bullshit promises of gold and velvet cushions. Duck tells them both, to their utter astonishment, that he figured out that they have a “secret relationship.” Maybe Duck’s not as dim as we thought. “Your decisions affect me,” Pete says acidly to Peggy later in the episode. They of course deny it vehemently to Duck and Pete storms out.

Peggy, as she always does, goes to Don for answers. Wisely, she doesn’t tell him about Duck’s offer but does try and get him to promise her a raise. Once again, Don lets her down. This seems to be a recurring theme in their relationship. “You have everything. And so much of it,” she says enviously as she fondles a baby bootie amongst all his baby booty. This is the first time we’ve seen any indication of what giving up her baby did to her. She gave all that up for her career and now she’s stalling. “What if this is my time?” she asks. Don has no answer to that. Clearly, Peggy’s not as happy at SC as we thought. She’s slowly starting to realize that no matter how good she is at her job, she’s never going to get what she wants and she’s never going to completely fit in because she started off as a secretary. She’s a total outsider. “No one told me they were all going in on it together,” she offers as an explanation for why she bought a separate gift for baby Draper. We can hear the sadness in her voice. 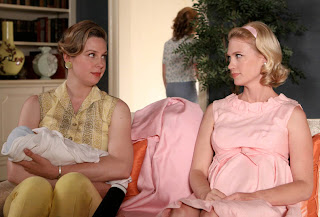 We’d hate to see the Sterling Cooper gang broken up, but after that scene it seems almost inevitable now. How can Peggy not take Duck’s offer? As much as Don’s been a mentor and a benefactor to her, it seems like that relationship has gone as far as it’s going to go. In a way, we hope she really does take Duck’s offer, especially since more and more, Sterling Cooper is starting to feel like a sinking ship.

Back in Ossining, Baby Draper is crying in the night and Don doesn’t even stir from his sleep. Betty slowly gets out of bed and walks dejectedly down the darkened hallway, the shadows forming prison bars on her back. She pauses outside the baby’s room and we can see that for all Betty’s talk of wanting everything to be perfect when the baby arrives, nothing at all has changed and she is more trapped in her prison than she ever was before.