There it is. The line – uttered by Betty’s father – that encapsulates the entire theme of the episode. Each episode is like a puzzle. At first glance, it’s hard to figure out, but once you get that corner piece, everything falls into place. It’s about money, or more specifically, class status, because in America, the former determines the latter. Once you figure out the hook, you can see it played out over and over in every scene. The little subplot of Sally Draper stealing money out of Gene’s money clip was pretty much a framing device for the whole episode.

As this episode demonstrated, you can change your social class with the acquisition of money, but you’ll never fit in as well as the people who are born into their class. Or as Connie, the old guy that Don meets while fixing a couple of Old Fashioneds (because both men literally are a couple of old fashioneds) says, once you get inside that mansion, “It’s different inside.” They’re both men who started off in the lower classes – some online speculation at Television Without Pity has it that Connie is Conrad Hilton – and Don once again relates a telling piece of his humble background to someone other than his wife, and both have found that life in the upper classes isn’t what they thought it would be. 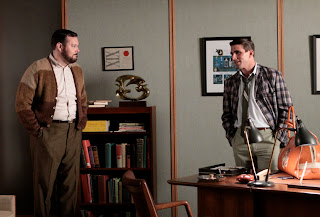 Roger and his new wife Jane are throwing a Kentucky Derby party at their country club and that brings everyone’s anxiety about social status to the foreground. The creative team finds out that not only are they not invited to the party, which brings out their class envy and the inevitable comparing of bona fides (“I’ve been here 6 years longer than you,” Sal retorts to Paul’s whine about being excluded), they also have to work through the weekend to come up with ideas for the Bacardi account.

Jane stops by the office to flaunt her new clothes and her new status as Rogers’ wife. Joan does a classic slow burn as Jane goes out of her way to treat her like a servant. Certainly, Joan must be looking at Jane and thinking about what she could have had in Roger, but from a viewer standpoint, Jane looks like a pretty tragic creature. Desperately unhappy and in over her head, she, much like Betty, drinks too much and eats too little. 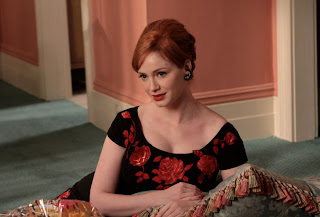 hief of Surgery at Greg’s hospital. Again, class and social status hang over everything as Joan and Greg argue over who gets to sit where at the table depending upon their status and Joan quotes no less an authority on social mores than Emily Post to make her point. There are various “classes” of doctors and wives attending and the wives even take a moment in the kitchen to openly compare their status with each other. The Chief of Surgery’s wife recalls with fondness the days when they had no money, like Joan and Greg. Joan gets two surprises this episode: one, that right now, Greg needs her more than she needs him and two, that he’s not as good a doctor as she would have hoped and therefore, her plans of moving to Riverdale and leaving her job suddenly look a little less likely.

When the conversation inadvertently shifts to Greg’s lacking skills as a surgeon, he forces his wife into the spotlight to save him. If there’s one thing Joan can do, it’s stand in the spotlight to divert attention to herself. Dutifully, she does so, albeit with visible unease. It’s not so much that she minds putting on a show; it’s that she’s concerned that she has to put on a show to help her husband out. Whatever sadness and unease the scene held was partially overshadowed by the sheer incongruity of beautiful, voluptuous Joan standing up to play the accordion, an instrument that pretty much no one in present day considers sexy. Joan being Joan though, turned an instrument we all associate with Lawrence Welk polkas into the sexiest little musical number we could imagine.

Vincent Kartheiser, who plays Pete, said in a pre-season 3 promo on the AMC site that this season was going to feature way more singing and dancing. We thought at the time that he was just making a smartass crack because who would ever associate singing and dancing with Mad Men? Turns out, he wasn’t joking. Last week had Peggy singing in front of her mirror and this week had no less than three singing numbers performed by Paul Kinsey, Joan, and Roger, plus a jaw-dropping dance routine performed by the ridiculous Pete and Trudy Campbell. 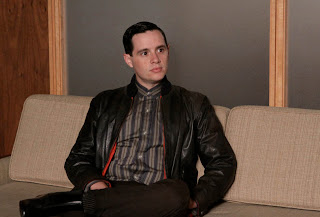 At Roger and Jane’s party everyone’s anxiety about their social standing is right under the surface. Don and Betty show up and the husbands and wives all make a beeline to them at once, eager to bask in their standing and be recognized. Pete and Trudy, because they’re very at ease in this milieu (“With this set,” brags Trudy to Betty, “one of my old beaux might appear!”) do better than Harry Crane and his wife, who are visibly uncomfortable and by the end of the party, annoyed at being so bad at working the crowd.

Working the crowd certainly isn’t a problem for the openly social climbing Campbells, as they take to the dance floor and quickly overtake it, forcing everyone else off with their energetic Charleston routine. And it is a routine. Only a childless couple would have had the time or even the inclination to rehearse their Charleston as these two so clearly did. That wasn’t a spontaneous moment. We can imagine the two of them spending hours in their apartment going over it again and again to get it perfect. Pete was scanning the crowd the entire time, eager for approval.

Back at Sterling Cooper, the creative team is hard at not-work and even there the social strata are delineated. Paul went to Princeton, Smitty went to University of Michigan, and Peggy went to Miss Deaver’s Secretarial School. But even Paul’s relative superior standing is questioned and derided by his drug dealing college buddy who sneers that Paul was pure Joisey who only got into Princeton on a scholarship.

Meanwhile, Peggy continues her journey away from her restrictive upbringing. Last week she sought out a one night stand and this week she uttered the destined-to-be-immortal line, “I’m Peggy Olson and I want to smoke marijuana.” With all the social anxiety flying around this 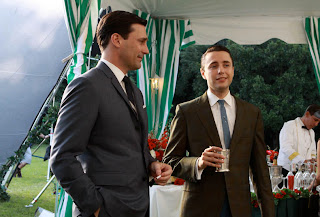 episode, it’s notable that once again, Peggy is the only one doing fine. “I’m in a really good place,” she announces with satisfaction to her co-workers, and later, to her new secretary re-affirms her feelings. “I’m not scared of any of this.” If last week’s fling was a little unclear, it should be clear by now that Peggy is the only person on the show who knows what she wants, knows what she’s doing, and is happy both with the journey and the destination. Everyone else is struggling to determine who they are and what they want except for her.

Betty has another encounter outside another ladies room with a stranger that leads to thoughts of adultery. A man placing his hand on a very pregnant woman’s stomach makes for a bizarre seduction scene, but Betty adores any kind of attention, no matter how inappropriate (like flirting and holding hands with a ten year old). Since the guy apparently knows Bert Cooper and works in the governor’s office, count on him making another appearance.

It would be almost irresponsible to have a discussion about class and status in America in the 1960s and not bring race into it. Because this is Mad Men, it’s done in oblique ways. One of the criticisms of the show from people who, frankly, don’t get it, is that it deals with all the social changes of the time but glosses over the biggest social change of all, the civil rights movement. People who make that argument are not paying attention. This is a show set in a milieu almost exclusively populated by white middle to upper-middle class characters. Black people were for the most part, in the background. That’s the whole point. If you pay attention, you can see that they’re slowly working their way into the foreground. The Carla we saw last night was a lot less conciliatory than the Carla we were introduced to last season. She’s taking no shit at all from Gene and snaps “I’m NOT Viola!” and an irritated “We don’t all know each other” to the befuddled man. If that wasn’t enough, then Roger yanks it to the foreground through his shocking (by modern standards) blackface routine to the crowd at his party. Most of the crowd laughs politely, but some of them, Don and Pete, most notably, uncomfortably wince through the scene.

Roger is a jackass. He always was a jackass, but as time progresses, he’s become even more of one. He’s a perfect example of the type of person who’s going to be left behind by the changes to come. It seems like his relationship with Don is irretrievably broken as Don tells him that people don’t think he’s happy; they think he’s a fool. That’s probably true, but even Don has a moment while watching Roger and Jane dance. It seems that Don is realizing that Roger just might be happy after all and goes out into the darkness to find his petulant upper class wife to give her a kiss.