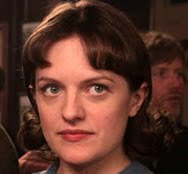 “Change is neither good or bad. It simply is.“

The Tao of Don. If you want a short primer about the underlying themes of any episode, you only have to pay attention to whatever Don’s pitching. In an ironic twist on the realities of advertising, it’s when Don is throwing a pitch to a client that the truest words get uttered. 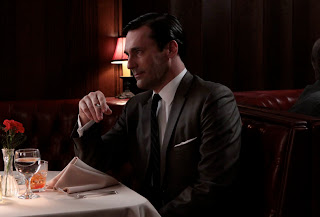 But in this case, it’s a little deeper than that. As much as we want to say this episode was all about change – and on the surface, that’s exactly what it was about – we think it’s more accurate to say it was all about conflict: Don vs. Peggy, Don vs. Betty, Betty vs. William, William vs.Don, Don vs. Roger, and Roger vs. his family. Of course, change and conflict are two concepts that are inevitably intertwined. You can’t have the former without the latter. All the conflicts of this episode are merely setting the stage for what’s to come, both on a personal level and on a larger, more societal one. Those changes (personal and societal) are deeply connected to each other and nothing sums that up more than the revelation that Roger’s daughter’s conflict-laden wedding is scheduled to take place the day after the Kennedy assassination.

That revelation contributed to the feeling that there was something of an apocalyptic and doom-laden tone to this episode. Don’s family life just got much more complicated (which, in true Don fashion, makes him just want to run barefoot through the grass with the proto-hippie woman leading the Maypole dance), Roger’s family is fractured and angry and his relationship with Don is tense (and with Joan is non-existent), and Sterling Cooper seems hopelessly lost and floundering and out of touch as they seem to be losing one opportunity after another and no one, not even the people in charge, seems to know why.

And in a far more general sense, the theme was old vs. new, which is exactly what Mad Men is all about. No one character sums 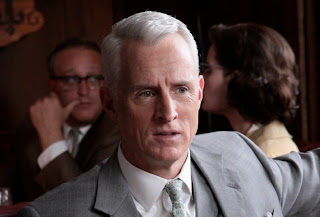 up that conflict more than Peggy.

In an account meeting to discuss a campaign for Patio, the precursor to Diet Pepsi, Peggy sits through the opening minutes of Bye-Bye Birdie featuring a vamping and screeching Ann-Margret. The men in the meeting are enthralled but Peggy’s just annoyed by the whole thing and points out that tailoring a campaign for diet soda around an Ann-Margret clone ignores the very people to whom they’re supposed to be appealing: women.

There are certain characters, like Paul Kinsey and to a lesser extent, Pete Campbell, who are ahead of the curve and without realizing it, primed for the societal changes that are about to come. But Peggy is decades ahead of all of them. When she points out that advertising does a poor job of appealing to real women and understanding how they think, she’s espousing ideas that won’t become the conventional thinking for another 25 years. Demonstrating an aggressiveness that suits her well (“Can I talk to you?” “Can it wait?” “No.”) she goes to the one man she holds in high esteem, her mentor Don, and tries to get him to see what she’s seeing. To her annoyance and disappointment, he flatly denies what she’s telling him. Yet another example that shows that Don, for all of his Master of the Universe swagger, doesn’t see what’s coming. He waves 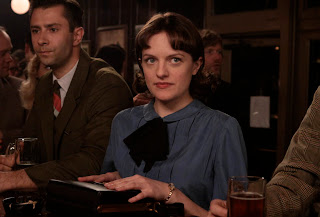 off her attempts to point out that women aren’t always going to respond to the Ann-Margrets of the world and he insults her in the process.

“Leave some tools in the toolbox,” he says to her, a somewhat obscure thing to say that nonetheless serves as a callback to Betty’s acid “little lesbian” crack about her daughter’s love of tools last week. To Peggy’s disappointment and fury, Don shows that he’s not all that different from the giggling frat boys that surround her. He cuts down her very womanhood with that statement.

When Peggy observed Joan doing that Joan thing she does so well around men, and then marched out to find herself a man to sleep with, we’re embarrassed to admit that we read that situation all wrong at first. We thought that Peggy was simply trying to “feel like a woman,” but upon a second viewing we realized that in a strange way, we were doing exactly what the men on the show do all the time: assuming that we know how women think by imposing a particularly male point of view on her.

While it’s true that she was reacting to the way all the men around her treat her as if she’s sexless, we also think it was all a bit of a put on. When she did her little Ann Margret tribute in front of her mirror, it really wasn’t done in a wishful sort of way. Taking a closer look at the scene, she was really skewering it. 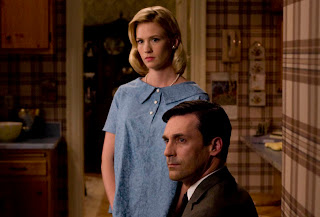 She all but rolled her eyes at the end. She made it fairly clear that she thought Ann-Margret, as she appeared in Bye-Bye Birdie, was ridiculous (“Can’t we at least make fun of it a little?”), a voluptuous woman acting like a hyperactive child. So she tried on a little of Ann-Margret and a little of Joan (by re-using Joan’s “crowded subway” joke), picked up a stranger in a bar, blew off a little steam (“My boss is a jerk!”) and apparently spent a handjob and oral-sex-filled night with the guy because he didn’t have a condom and there was no way in hell she was going to find herself in THAT predicament again.

It may have been partially fueled by the simple desire to get laid, but it was also a sort of experiment; a way to see how the other half lives. We can’t ever predict this show, but we doubt very much that this sort of thing is going to become a habit for her. Self-assured, yes. Sexually active, maybe. But modeling herself on the female archetypes of the day? Not likely. She did it to gain some understanding and to prove something to herself. She has no desire to be Joan or Ann-Margret and we suspect the whole experiment only re-affirmed that for her.

And speaking of newly aggressive women, let’s talk Betty. She’s still, in many ways, childish (expecting Don or her brother to come up with a solution to her father’s dementia) but she’s more clearly wearing the mantle of an adult in other ways. She’s become quite aggressive with Don and more vehement when she talks about other people. To her lesbian line of last week, we can add her assessment of her brother’s “neverending bullshit.” The Betty of season one would 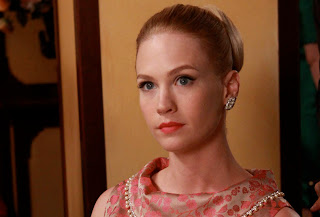 have never talked that way. “I’m in a foul mood,” she spits out to Don, right after she responds to his secretary’s offer of a glass of water with, “Before you do that why don’t you tell me how long I’m going to have to wait.” She’s becoming hard and we’re sorry to say, a little bitter. She reminds us of (and we predicted this last season) Roger’s ex-wife.

We said last week that the cultural references were going to be coming more often and more obviously, and we laughed out loud at Joan’s Wilma Flintstone crack about Betty not showing her pregnancy. Of course, Betty’s not showing much because she apparently doesn’t eat and her poor baby is surviving on wine and cigarettes. Yeah, she’s kicking, Betty. She’s kicking because she’s hungry, drunk, and having nic fits. This show does foreshadowing in very subtle ways so we’re a little concerned about the health of the impending Draper baby. Especially with the new status quo in the Draper household.

After the kind of unproductive spats that only adult siblings can have (because of a lifetime of grievances and an unwillingness to put it all out on the table), Betty reverts to child mode and implores Don to do something about her brother’s plan for dealing with their senile father. After a particularly shitty day in the office, Don does what Don does best: gets all alpha male on his brother-in-law’s ass and, probably without thinking of the consequences, declares that his father-in-law will be living with them from now on. We doubt very much that this is what Don wants. But he’s losing control on his job and he’s nothing if he can’t control things around him. Besides, he’s in full on “Whatever you say, dear” mode with his difficult wife. If we thought things were bad in that house last season, they look to be magnitudes worse in the coming season.

Meanwhile, back at Sterling Cooper, the disarray of a post-merger company continues. Paul manages to almost lose 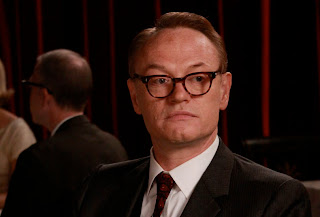 the Penn Station account singlehandedly by making the mistake of understanding what’s coming ahead and rejecting the kind of destructive new-for-the-sake-of-new city planning that went out of style by the seventies. Don is brought in to work his magic – and he succeeds by intoning that New York is a city in decay and they should look to bright and shiny California for inspiration – but Lane Pryce informs him that the home office in England isn’t keen on the idea of taking on this client. Don is frustrated, because he rightfully predicts that the account could be a huge money-maker for them and asks Pryce, “Why the hell did you buy us?” Pryce, whose bitchy, snotty wife perfectly embodies his own feelings about living in New York and working with these people, responds with a damning “I don’t know.”

At the end of all of this conflict and doom, the show closes in a typically obscure manner as Don comes into the office after dealing with his senile father in the middle of the night and stares at Peggy working at her desk. Why did Don stare at Peggy like that? We can’t know for sure, but recall this: he was the only person last season who noticed that she’d changed her hairstyle. None of the other men could see her standing right in front of them. She and Don understand each other very well and in a strange way, we think there was some part of him that sensed that she was angry at him, sensed that he did something wrong, and sensed that she had done something radically different from what she would normally do. Peggy, for her part, seemed perfectly happy in her own skin. Not so much a new woman, but a woman with a newer understanding of herself.