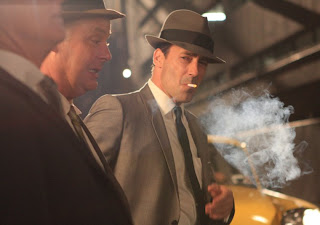 We have to suppress our knowledge of the sometimes seismic events that occurred throughout the ’60s when we watch this show because for the most part, events happen far off camera and are only obliquely referred to by the characters, more often to provide ambiance than any sort of reflection. For the most part, Mad Men looks at an era not through its major events but through the eyes of normal people reacting to the millions of minor events in their day to day lives. It is, in some sense, a more accurate take on history or at the very least, it’s a take that does a good job of faking the feel of accuracy.

The common refrain about the ’60s is that they “really started” when JFK was assassinated in November 1963. Unless they do something radically different between seasons 2 and 3, it looks like we’re not ever going to see the events of that day from the points of view of the Mad Men characters. Supposedly there will be time shifts of up to a couple years between every season and since we’re in August of ’62 with 4 more episodes to go, it’s looking like Season 3 will be starting at some point well after the assassination. 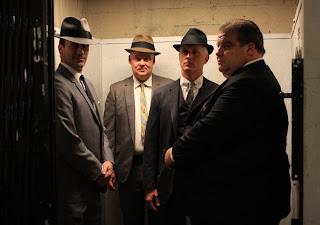 Why bring this up? Because last night they did use an event as a backdrop for the entire episode and it’s not one we ever would have thought of: Marilyn Monroe’s death. It’s not that outside events are never referred to on the show, but ones to which nearly every character has some sort of reaction are rare. The only others we can think of are the crash of Flight 1 (which was really only used to tell a Pete story and then dropped) and Kennedy winning the election (which was heavily featured to drive home the point that Sterling Cooper is seriously behind the times). 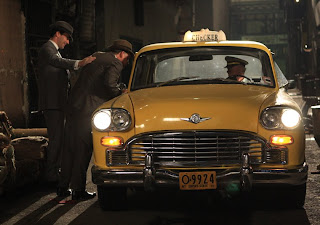 got bored with it: scenes of characters waking up. From Betty and Freddy passed out on their respective couches, to Joan in Roger’s office, to Don being woken up by an angry Mona in his office, the message seems to be that everyone’s waking up to something. This being Mad Men, we’re not going to be told what, but it felt to us that this moment, for these people, is when The Sixties started.

Freddy woke up to a world that simply wasn’t going to excuse him any longer. It’s no longer the good old days of office tall tales about hard-drinking ad men doing outrageous things. It’s a new era and Freddy just doesn’t fit anymore.

Joan woke up to the realization that the world can treat women like her (and Marilyn) pretty damn shabbily and, judging by her scene with Roger (which, like every scene she has with 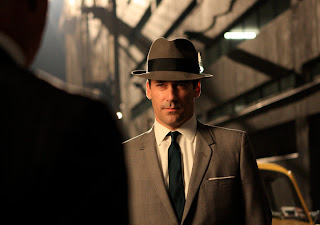 Roger, crackles and spits sexual tension while slogging under the weight of an ended affair), she might still be in love with him – or coming to the realization that she actually did love him once.

Don and Betty both woke up to lives even emptier than the one they shared.

The only one not shown waking up is the one who’s already wide awake: Peggy. We’ve been saying for a while that if we had to guess at the characters’ ultimate fates, our guess would be that Peggy will eventually wind up with Pete. We don’t know if that’s going to be the case, but there does seem to be some sort of relationship building between them, above and beyond their previous clandestine one. Pete seems to respect Peggy on some level and their youth and the weight of the roles they play sometimes force them into these strange little alliances. We can’t picture Peggy storming into anyone’s office to tell them off the way she did Pete and not only was she completely comfortable doing so – in fact, it felt like one of the few times she ever let her mask slip – but Pete wasn’t even remotely angry or put out about it. Pete won’t even let his own wife mouth off to him but his first response to Peggy’s rage was to ask for a chance to explain himself.

It’s notable that Pete and Peggy were the only ones to have any sort of real reaction to Freddy’s indiscretion. 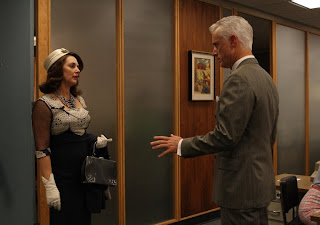 Everyone else was either laughing it off or trying to explain it away, but Pete reacted with extreme revulsion and Peggy reacted with a tenseness that makes us think she’s not gotten this far in life without knowing at least a couple drunks along the way. She is appalled but immediately wants to fix and forget. Her reward for being the only prudent and empathetic person in the firm is a promotion so big that it left our heads spinning. Taking over the Senior Copywriter’s accounts is a HUGE leapfrog for Peggy and we hope two things: 1) that the men in the office don’t give her TOO much shit for it and 2) that she’ll get a big enough raise and take Joan and Bobbie’s advice and get herself a new damn wardrobe.

Another aspect of the episode that makes us think that this one was overtly “about” the era: suddenly the silent black people in the background are speaking up and they have stories and inner lives of their own. The Drapers’ maid offered some damn good advice for Betty (“Splash some cold water on your face and go outside. You’ll see that everything is right where you left it.”) but it was the elevator man’s poignant statement about hiding in plain sight – something he does every single day to earn a living – and how it couldn’t help Marilyn that spoke to the changes that are just around the corner. That, and Roger’s bemused announcement that another agency had hired a “colored kid.”

As for the Draper marriage, from where we’re sitting, this one looks dead in the water. We can’t imagine that’s where the writers are going with this because without her mar 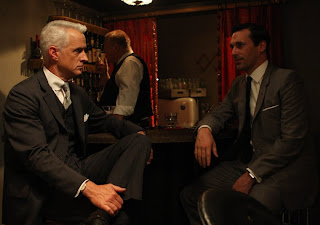 riage to Don, Betty would drift too far away from the Sterling Cooper universe to still remain in the show and we just don’t see that happening. Betty’s deteriorating even further and when she’s not dazedly wandering around in a housecoat with a glass of wine, she’s setting her friend up to do the thing she herself doesn’t have the nerve to (and for the crime of having a seemingly happy marriage). Still, she doesn’t seem inclined to invite him back and he came right out and admitted to Roger that he’s not sure he even wants to. Of course Roger being the needy, immature man that he is, he took Don’s statement in the worst possible way. The Sterling marriage always served as a prediction of where the Draper marriage is heading but in another huge leapfrog move, Roger chucked it all and went for Joan II, Jane. We didn’t see that one coming at all and we can’t WAIT to see Joan’s reaction.