For an episode long on shots of characters looking into mirrors, this was strangely short on a lot of intr 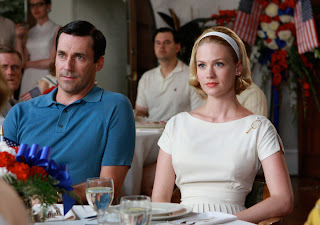 ospection. The opening shots of Betty, Joan and Peggy putting on their undergarments had a cold, clinical quality to them as the women harshly assessed their appearance but barely seemed to notice themselves in their reflections.

It was the men who stared long and hard at themselves. In Pete’s case, he seemed to like what he saw after his bizarre dalliance with the rejected Playtex model who lives with her mother. Don, on the other hand, saw something in his reflection that he simply couldn’t handle and, this being Mad Men, we’re not sure what that was.

Despite our hopes that their relationship had literally come crashing down around them, it appears that Bobbie and Don are still drawn to each other, no matter how dangerous their attraction seems. We started liking Bobbie a little more after last episode and she continues to drop little bombshells, like the revelation that she has two grown children. Don, on the other 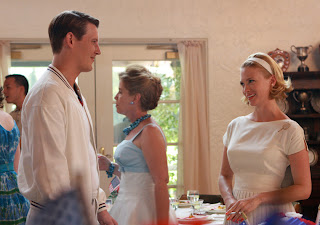 hand, clearly doesn’t want to know too much about her and it’s interesting to note that Don’s reaction to Bobbie’s motherhood is exactly the same as Arthur’s reaction when he sees Betty with her kids: extreme discomfort. Women had very strictly defined roles at this time and the male characters seem to struggle with the idea of a woman having two sides to her: mother and sexual being.

Don REALLY doesn’t like that not only is Bobbie a mommy with a clitoris, but she’s also a woman who talks to other women about sex. You could see his mind being blown when she revealed that he has a reputation among a certain class of Manhattan women for being something of a he-slut. Because he’s Don Draper, he had to react in the most egregious manner possible, tying Bobbie up and reprimanding her for not shutting up before walking out on her. Sometimes Don’s a lovable rogue and sometimes he’s just a shit. We’re not sure exactly what Don was thinking when he reacted to his reflection in the mirror, but clearly the worship in little Sally Draper’s eyes is killing him. It’s interesting how Betty takes her frustration with Don out on her son and 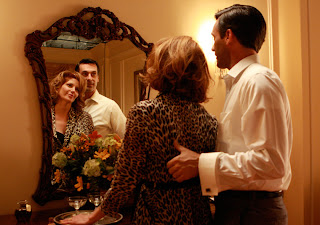 Don uses his daughter as his conscience. It’s not just that these kids are mixing drinks for their parents; they’re also standing in for the adults in their lives that they can’t face.

Of course, that “two sides to a woman” theme is prevalent this episode as Sterling Cooper tries to convince Playtex to go with a more playful, Maidenform-like approach to their advertising. Peggy is ironically pushed aside on the one account that none of the male executives have any personal experience with and forced to watch the men reduce the needs of women to “making men happy.” Unsurprisingly, the pitch fails and Playtex wisely decides to continue selling their items directly to women instead of to mythical women who are only concerned about men.

Frustrated and shut out, Peggy turns to the last person one would expect: Joan. Joan’s not one to cluck and hug and make someone feel all better. No, our girl is just as harsh as anyone else in this world, at first taking Peggy to task for “Never listen[ing] to a word I say,” a criticism both 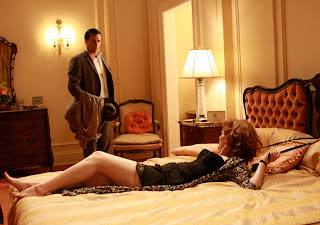 endearing in its petulance and dead on in finding its mark, and then getting serious and telling her that if she wants to be taken seriously as a woman, she should stop dressing like a little girl.

This mirrors exactly what Peggy learned from Bobbie last week: that the art of being a woman is “powerful business” when it’s done correctly and Peggy needs to learn how to do it if she wants to move ahead. The men in the office seem to have a sort of begrudging respect for Peggy, but they don’t see her as a complete person. She’s neither a Jackie or a Marilyn to them and since that’s the sum total of womanhood for these men, Peggy is something of an oddity to them. Like a bear riding a bicycle.

So Peggy shows up in a much nicer dress with her hair all done and plops down in the lap of the first man she sees. It’s a little painful. On the one hand, we want to applaud her for stepping outside herself and doing what she needs to to get ahead. On the other hand, we’re cringing because apparently she needs to wear tighter dresses and sit on men’s laps to do so. Pete gave her another “I don’t like you like this” look but for once, we kind of agree with him. Peggy, we don’t like you like this, but we get that in 1962 your options for advancement were limited and when you’ve got women like Joan Holloway and Bobbie Barrett mentoring you, it’s only a matter of time before the wiggle and the giggle start entering your arsenal. It’ll be interesting if the new womanly Pe 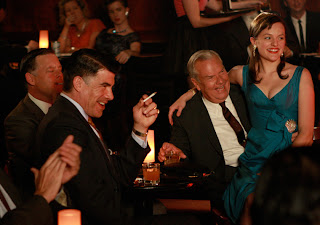 ggy sticks around, especially once her mother and sister get a load of her.

In other Sterling Cooper news, Duck and Don seemingly bury the hatchet but that’s not good enough for Duck, apparently. We knew there was some supposed crackup in his past and we were waiting for it to rear its head, but we were surprised that it just came up out of nowhere. Kudos to Mark Moses for a great bit of acting, because the scene where he let his beloved dog go so he could go upstairs and ruin his life in peace was utterly devastating. We have a feeling that Duck’s inevitable slide into tragedy will be long and painful, so strap yourselves in.