Guess what, darlings? It’s time to grill another judge! The fabulous Jonathan Adler was kind enough to take time out from his busy schedule of pot-throwing, ping-pong, and sock-burning to submit himself to us (figuratively speaking). 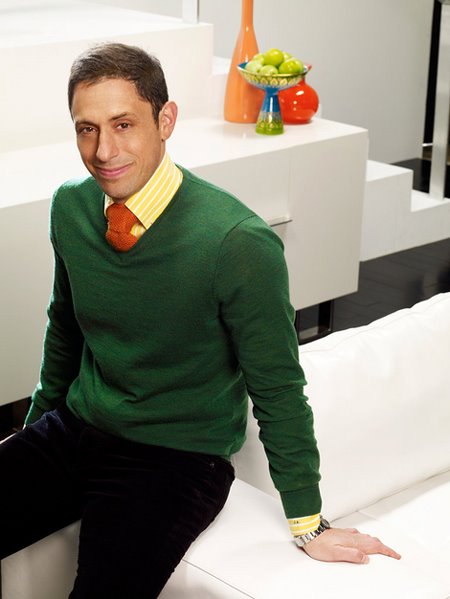 So, what surprised you about how the show developed?
To be honest, I was surprised at how talented the kids were. Props to Bravo for casting based on talent instead of just casting a bunch of lunatics.

Has your husband Simon had any criticisms for you? God knows if one of us was a reality show judge, the other one would constantly be shrieking “What the hell were you thinking?” And why hasn’t he been a guest judge? We want to see you two bicker.
My Simon is the cutest and greatest husband ever. For those of you who have read his books or his columns or seen him on VH1 or ANTM, he is as mignon in real life as he appears. For real. We were desperate to have him as a guest judge but we filmed in the fall just when he was installing his legendary Barneys Christmas windows so he was swamped with work. As for us bickering, we are both opinionated little monsters, but we’re almost always in agreement. We have very similar philosophies about design and life. We both believe in being bold and immoderate, so I think we would have responded similarly to the contestants. 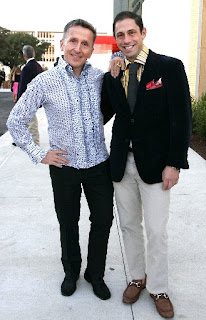 n real life, we settle all disputes on the ping-pong table and I’m bigger than him, I’m stronger than him, and I always win.

Despite the fact that you spent the season sitting next to two uber-Glamazons, your clothes have been a big topic of discussion. Did you expect that? Were your outfits planned to get people to talk or were you just dressing like you normally would? We love the way you dress, by the way. But we’re not with you on the no-socks thing.
Moi’s normal attire hasn’t really changed since my bar mitzvah. I normally rock a pair of Levi’s cords with a Lacoste shirt and a pair of Rod Laver sneakers. Easy, breezy, beautiful. But, let’s be honest—it’s getting a bit mutton-dressed-as-lamb-ish.

Anyway, that’s my everyday attire. When I need to get tarted up and go out, I take my fashion cues from the peacock. I love a bit of color, I love a Dandy-ish pocket square, and I love to mix patterns and colors with abandon. The details—a chunky, Double Windsor knotted tie, shriveled silhouette, and socklessness—are, I suppose, kind of English Dandy meets Italian preppy meets My Three Sons. And, socks are so last century.

Re: The Glamazons—how f***ing hot are Kelly and Margaret? If I was a man…

We understand you’re opening your eighth store. Congrats! Are you planning a worldwide design empire? We remember when Martha Stewart launched her magazine, she vowed “We will own Christmas.” What melodramatic, narcissistic, Martha-like goals do you hold for yourself now? 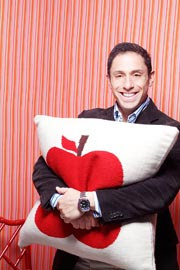 My main goal is to never have a job. Before I made a go of it as a potter, I had a series of disastrous jobs. I was fired from every one and I deserved to be. I was a terrible employee—sleeping with the boss, yammering on the phone, rolling in late. So, I think my main motivation in building my business has been to avoid having to look for a job because I’m unemployable. I suppose I could maybe be a barista but I don’t know if I could handle Barista academy. Anyway, yes, I just opened my eighth store (on Greenwich Ave in NY’s west village) and it’s j’adorable. I love what I do, I love designing and making things, and I’m very very happy in my career.

You’ve described your style as “Maximalist” and you’ve made well known your disdain for Minimalism. How do you do Maximalism without veering into overboard and tacky?
I suppose that what I really mean by Maximalism is that I believe you should surround yourself with the stuff you love and shouldn’t be cowed into a rigid design scheme. Objects speak to me—when I see something that’s great, I buy it and I find a place for it in my already packed pad. Stuff makes me happy.

Re: The overboard and tacky thing, it’s certainly something to be aware of, but if you have a connoisseurial eye and only buy great stuff, you’ll be fine. Our company mantra is “If your heirs won’t fight over it, we won’t make it.” Every piece I make, whether it’s a pot or a pillow or a sofa or a rug, is something that I believe in and love.

We’re not exactly going out on a limb when we say your work is clearly mid-century inspired. Who were the designers of the period you admire the most and what is it about that period that you love?
I think that I’m inspired by the optimism of mid-century modernism. My favorite designers from that era are probably Bonnie Cashin, the fashion designer, Alexander Girard, the graphic and industrial designer, and Bjorn Wiinblad, the ceramicist and painter. They all made stuff that was personal and beautiful 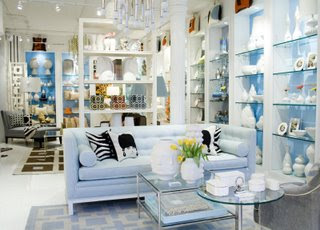 and fun. And, most importantly, they showed that design can be flawlessly chic and happy at the same time.

And finally, what exactly do we have to do to get you to consider a new sendoff for next season?
Yawn! Silliness is underappreciated. See ya later, Decorator is silly, memorable and fun. I j’adore it and I think it’s about time you embrace it aussi. Anyway, that’s all I got for you.

In a while, Ceramic Tile. And thanks, doll! Ciao!